Max Lachmann from Pole Position Production has previously shared several interesting stories on how to capture excellent vehicle sounds here on the blog – both when it comes to recording and implementation.

But what’s the story behind the Pole Position company, and just how did they end up creating one of the world’s absolute top vehicle sound collections? I decided to have a talk with Max to find out: 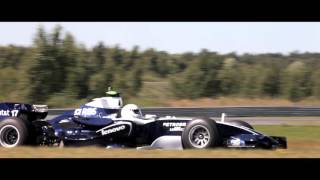 Hi Max, what’s the story behind Pole? What made you start Pole in the first place – and who’s the team behind it?

Pole was originally started in 2000 as a music production company by me and Bernard Löhr, and eventually Mats Lundgren. Bernard is a legendary mixing engineer, who has been working with both Swedish and and international artists, and also manages ex-ABBA Benny Anderssons Mono Music Studio in Stockholm. Besides having the best ears, he is also a car lunatic and race driver, and this is actually how I got to know him in the first place, before I started out as a trainee at the Polar Studios with Bernard being my mentor. Mats joined Pole a few years later. He was a pop star back in the days, and we teamed up as song writers and producers. Without any real success I must admit. But Mats is one of the most musical persons I know, he plays pretty much any instrument, and has done scores for games such as Mad Max and Just Cause 2. Not many people are familiar with that Pole do music too, since what we made a name for ourselves in the business is our vehicle recordings.

One of your core specialties is vehicle recordings – how did that come about?

We had a strong interest in motorsports and racing within Pole (hence the name). I literally grew up at race tracks following my dad around Europe, and Bernard was, and is, an active race driver who used to compete in the Swedish GT series with his Porsche GT3RS.

One of his competitors on the race track at that time was a Swedish developer of racing games, and he asked us if we were interested in doing sounds for his game. And that is how it all started.

What’s been some of the wildest recording experiences you’ve had so far?

There’s been so many, and each with it’s own circumstances to deal with. You really don’t wish for a wild experience as a recordist, because that means it’s less controlled. So I try to prepare and do anything I can to avoid that. Still, it happens that airlines lose your bag, weather is terrible, you need to communicate with a driver in a language you don’t know, go crazy fast in cars with a driver you don’t trust or the vehicle breaks down.

But one of the recordings I am most proud of is the one we did of a Messerschmitt 109.

Mats did a really weird recording too, recording an old summer house being burnt down for an art project

There’s not many around that flies anymore, even fewer with an authentic engine. We have also recorded race cars during very difficult circumstances, adjusting to FIA regulations and still having to deliver at a good quality. Mats did a really weird recording too, recording an old summer house being burnt down for an art project. We got DPA to sponsor us with a couple of microphones to place inside the house as it burnt down, which provided us with some rare fire sounds.

However, the best thing with going around recording is the good company and the nice and dedicated people you meet everywhere. And the satisfaction of delivering a really nice recording to your client.

Max Lachmann and the team at Pole Position Production are behind some of the very best vehicle sound effect libraries in the world – here’s a small selection:


You’ve got a huge amount of libraries – what are some of your favorite ones?

We have some really nice muscle cars from the 70s that I’m really happy with. The last couple of years we have made an effort to cover material for both games and film, and these libraries show that. We also have a great Porsche 911 SC from 1981 which sounds awesome, and brings back childhood memories.

You’ve also recorded a Formula 1 library, which is incredibly rare (if not unique). What’s the story behind that library, and what did it take to capture the sounds of F1?

We have gotten quite a few questions about F1 recordings over the years, and always had to give the same answer. And we have also had a few openings to record F1s for actual F1 teams, needing the sound for their simulators, but it has always come to a halt for various reasons.

I have always said that I will quit when I have recorded an F1, but I had to reconsider that…

Finally we decided to rent an older F1 car and to get the job done. So we rented a 2007 Williams FW-29 fitted with a Cosworth V8, the car that Rosberg used to drive, and we gaffer taped a Zaxcom on the outside of the chassi, and Bernard took it for a swing on a track in Estonia. And here’s the result – an actual Formula 1 SFX library. I have always said that I will quit when I have recorded an F1, but I had to reconsider that. Nowadays I say I will quit when I have recorded a space shuttle…

What are some of the improvements you’ve made to your SFX library creation process over the years?

The biggest improvement is the amount of material and perspectives we record today. We started out with games in mind, getting onboard material only, but today we focus just as much on exterior material hoping to reach the film industry as well. We are also trying to improve the way we package our libraries. Instead of just eight or ten long files of an onboard take, a session today with all the exteriors can be 20-40 tracks. We still try to keep them in sync if possible, but we divide the material into different folders named after the maneuver that is in the files. And finally we are trying to find a good standard for our metadata.

Here are some of the excellent stories and guides Max has written for the A Sound Effect blog:

• Recording and Designing the Winter Sound Effects for SNOW – the story on how Max and the team captured a very special collection of winter sound effects.


What’s coming next from you guys?

We have so many recordings that we haven’t had the time to edit and make libraries from yet. First, there’s alot of vehicles of course. World War II tanks and planes, a Hummer H1, a dirtbike, snowmobiles, some trucks and much more. But we have also some other libraries in the works. We are working on an extremely rare military library, with attack vehicles performing an exercise firing cannons and machine guns. It has some amazing tails, bullet bys and projectile sounds. And I am also working on getting access to a space shuttle by the way…

A big thanks to Max Lachmann for the story and insights behind Pole. Check out their selection here on A Sound Effect, and meet the team on Facebook here, and on Twitter here.