I love horror movies, so when I spotted Ryan Thompson’s award-winning short, Play Time, I decided to investigate a little further. It won the 1st price in the ‘Bloody Cuts – Who’s There Film Challenge’ – and it won the award for best sound as well. I got in touch with Ryan to hear more about how he created the sound – and you’ll find his exclusive insights below. But first, let’s have a look at the short and what the jury said about it: 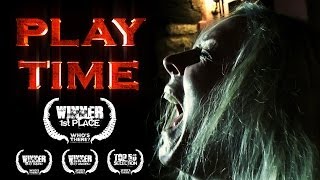 What the jury said:
Here’s what Bloody Cuts’ judge Phil Lee said about the winning sound:
“We have made our decision and we have both agreed on ‘Play Time’ as our Sound Award Winner. This film really stood out in its quality of execution and sonic decisions. Very well thought-out design, clean, great dynamics, married with the picture and story development perfectly and most of all, had the big scare factor!! Loved the TV static design with the disturbing screams, could have been really overwhelming and harsh in an annoying way but was shaped and mixed really well.”

Hello, I am a young film maker who recently won the international ‘Bloody Cuts – Who’s There’ challenge with my short ‘Play Time’, which also won Best Sound. Being an independent film maker, I have to tackle each area of film making from pre to post production by myself; this allowed me to develop my sound design and music production skills.

Sound design is very important to me and I always try and give it 110% on every project I create. It is such a fundamental element that cannot be overlooked, so I am always trying to hone that skill and get better with each and every film I work on.

How did you come up with the idea for Play Time, and how early did you start thinking about the sound?

I was originally going down to Oxford (UK) to shoot with the actors involved for a different project, but the night before I left, I found out about the ‘Bloody Cuts – Who’s There’ competition. After they told me that they would like to be involved, I quickly wrote the concept.

I knew I wanted it to be paranormal as I hadn’t really attempted that genre before, and I wanted quite a bit of activity to go on so I knew that sound would be really important. How did you approach the sound for the Play Time, and how did you go about creating it?

The sound design is one of my favourite stages in post production, and it helps to take a lot of time on it, as it can make or break any film. Once ‘Play Time’ was cut together I began working on the sound. I wanted the tone to reflect the scene and for it to slowly build, so I knew I wanted subtle ambience and some faint pulsing bass/drums.

I built up the initial sounds around the beats in the film as there are sections of almost silence, and others that are overwhelming and chaotic. I wanted to try and achieve a sense of organised chaos; as the paranormal activity in the room increases, I wanted the sounds to overlap, build up, attack each other etc.

For instance you can still hear the subtle trickles of blood on the painting of the hare, even though a crescendo of sounds carries on. So it was really about messing with it till it felt right and worked well with the visuals.


What were some of tools and libraries you used to create the sound?

All of the Foley – i.e. footsteps, bed creaks, door bangs etc -, I recorded later in my home with the Tascam DR-40, which I also used with the actress to dub her audio in. I have a lot of FX libraries and packs of both horror and cinematic sounds, so I always go through and listen to them and choose the right ones for the part. I recommend packs/sounds from primeloops and pond5, to name a few.

A lot of the music was from videocopilot’s Pro Scores, but the main drums in the short were pulled from a song I made a couple years ago which I then distorted and reversed to add an uneasy tension. And the songs on the record player were originals from me and the actress which again I reversed, pitched and distorted.

Any tips and ideas for other filmmakers out there when it comes to horror sound?

Sound is so important! As I said before it can make or break a film so really spend a lot of time and effort on tweaking it and getting it right. It needs to flow and tell the story by itself, the visuals should just be seen as a backup.

The effect music has on someone is very powerful and can instil fear or generate inspiration. Creating the right piece to reflect the story being told is critical and boosts the film as a whole so much more so cannot be overlooked.

You will know when it is done, or when something doesn’t fit in right, so it is all about listening and working on it until it works seamlessly with the visuals.

You’re working on a new project which relies heavily on sound design as well. Can you share a few details on what that’s about?

I guess the best way to describe this new short is ‘neo-noir’. It is very different from anything I have done before, and for this the sound design will need to really carry the energy of the film. It has no on-screen dialogue, so the audio itself will be used to reflect the scene and it’s pulses. The audio itself will be surreal/dream-like with subtle elements of reality dispersed throughout; it will definitely be an interesting project to work on. This will be released soon for the ‘My Rode Reel – International film competition’.

Thanks to Ryan Thompson’s for giving this behind-the-scenes peek at the sound for his award-winning horror short! You can find out more about him and his work at the VFXProductions page.