He’d been recording in forests, canyons, parks, and wetlands, and I was curious to hear more about the project and his experiences.

He was kind enough to share the story – and not only that: He also shared the recordings he captured, and you can download those for free below! You’re welcome to use those recordings in whatever way you like.


My name is Rick Hernandez, I am a Sr. Sound Designer at Respawn Entertainment & Lead Sound Designer and Field Recordist at Melee Sound Design.
I’ve been recording out on the field for many years, but last year I decided to peruse it at a higher level and the result was the soundpack RUPTURE, published by SoundMorph – and I’ve just released the Dimensions door soundpack.
Recently I got inspired to go out on the field again to record surround ambiences when I rewatched the Soundtacker movie, which is a film about iconic audio recordist Gordon Hempton.

I love recording the sounds of nature and ambiences in surround sound, and I’ve been able to capture some really great recordings in the past, but the setup time and the results can be very frustrating. Setting up a tree with five different microphones takes time, a lot of testing and re adjusting, lots of cables and moving from place to place is very time consuming. Even after setting up everything meticulously, the results were mixed due to wind, weather, and inaccurate imaging.

But recently I got the opportunity to demo a DPA5100 Mobile Surround Microphone. The DPA 5100 is a solidly-built, multicapsuled Surround Sound microphone that uses Windtex fabric technology to nest an array of five capsules. The capsules are Omni-directional and make use of the DPA DiPMic (Directional Pressure Microphone). It is incredibly easy to setup and has a very wide and astonishingly accurate 5.1 imaging.

What I like most about the microphone is its wide dynamic range with having low sensitivity to wind noise which is so important when recording exterior ambiences. It also has and incredibly low noise floor and I can conveniently place it on a microphone stand and record surround ambiences in a flash. On to the recording…

The first location I visited was the Angeles National Forest in Pasadena. It has a pretty big waterfall with a long down stream of water leading up to it. 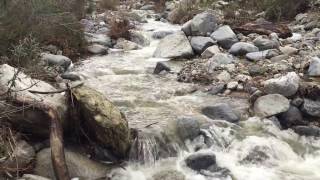 I wanted to record the more delicate steam rather than the white wash white noise of the waterfall. I got there in the early afternoon before the light drizzle and rains that were occurring that week in LA. As you can see from the videos, I was able to easily mount the 5100 on a mic stand and record both up and down the steam. For this field recording trip I took out my amazing Zoom F8 which has the ability to let me record from about 30 feet away using the F8 Control App on my iPad. After I recorded the steam, I also ended up recording the waterfall once I recorded the stream.. figured I was already there.

Recordings from Angeles National Forest:
To hear the 5.1 recordings, click through to Soundcloud for each example and download there:

Here are all the surround recordings – in one go:

Want to save yourself some clicking and get all the 5.1 recordings in this story, in one go? Just enter your name and valid email address below to get the download link + the much-loved A Sound Effect newsletter: After some lunch at the Switzer picnic area, I headed over to the west side to the Ballona Wetlands. It was starting to get darker and the rain that we had gotten in the days prior had brought out the wildlife. There were storks everywhere, frogs were singing and the insects were all about. These wetlands are one of the few remaining in the Los Angeles Basin. These wetlands have been the subject of a battle between developers and environmentalists that has been going on for over twenty years. Hopefully we can preserve this land and its amazing wildlife. The next day I went to record at the Simi Valley Canyon. The Simi Valley is a synclinal valley in Southern California connected to the San Fernando Valley. It is an enclosed valley surrounded by mountains and hills. Again there were many birds and other wildlife due to heavy rainfall in the days prior.

One of my favorite things in this location was the local Acorn woodpecker. It’s a small sized bird that when pecking at trees to find food produces a really loud sound the echoes through the valley. I was perched up and elevated on a mountain looking over a neighborhood and the echo on the recordings was very unique.

Recording from Simi Valley:
To hear the 5.1 recording, click through to Soundcloud for each example and download there: As I made my way back home from Simi Valley it was about 9:00pm and completely dark. It was raining, so I decided to go to a nearby park near my house that has lots of trees and other vegetation. The rain falling and dripping down the dozens of trees in the surrounding area and creating splashes and puddles that created some really interesting sonic textures. I used the OC5100 Outdoor Cover that is included with the mic to protect the mic from rain and unwanted contact mic sounds. In the past I’ve had to rig an enclosure with hair hog in a process that is impractical and time consuming so the OC5100 is invaluable to anyone recording rain on under rainy conditions.

Recordings from Two Strike Park:
To hear the 5.1 recordings, click through to Soundcloud for each example and download there:

Recording with surround ambiences was a blast with the DPA 5100. All the gear I needed was my Zoom F8, the DPA 5100 with its cable and both the Outdoor Cover/Windjammer and a microphone stand. The recordings I was able to capture with the Zoom F8 and DPA 5100 were amazing and I’m really happy with the imaging I got from the locations recorded.

Technology is an amazing thing, and with the latest advancements that DPA and Zoom have done in recent years it is now possible to go out on the field and capture pristine sounding Surround Recordings without having to live out of your van.

A big thanks to Rick Hernandez for sharing his recording experiences! Read more about Meleee Sound Design here, and hear more about Titanfall 2 from Respawn Entertainment, a project he’s been Senior Sound designer on.