If you’ve been working with audio in the past few years, it’s been hard to miss Reaper. It’s a constantly-evolving DAW with a lot of flexibility in terms of scripting and customization – and a growing number of sound designers swear by it. I was curious to hear the story behind Reaper, so I managed to get in touch with creator Justin Frankel. Here’s Justin, on making Reaper, his favorite features + his tips for first-time Reaper users:

Hi Justin, please introduce yourself, Reaper and the team behind it:

In the late 1990s I wrote a piece of software called Winamp, it was one of the earlier programs for MP3 playing. In the early 2000s I started playing and recording music for my own enjoyment, and after a few years of using other software for this purpose, I found myself wanting to use something that didn’t exist. So about 10 years ago (in late 2005) I started developing a tool for my own use, which became REAPER. I wasn’t really trying to solve any specific problems, but just to make a tool that was convenient and worked well for my needs.

While REAPER was initially and still developed for my own needs, we also try to make it as useful as possible for as many people as possible.

Since I began the initial development, other people have contributed a great deal to the code, including Christophe Thibault (whom I had previously worked with on Winamp 5), Schwa, and JeffOS. In addition to the code work, I also have the pleasure of working with White Tie (graphic design), Ollie (support), Geoff (user guide), and Kenny Gioia (videos).

While REAPER was initially and still developed for my own needs, we also try to make it as useful as possible for as many people as possible.


The Rise Of Reaper – an interview with Reaper creator Justin Frankel:

What’s been some of the major milestones in Reaper’s history so far – and when you look at Reaper today, what are some of your personal favorite features?

REAPER’s development has always been so evolutionary, it’s really hard to look at particular milestones as being accomplishments. It is very pleasing seeing more and more people use it, and it’s also very pleasing to have other developers actively support it. When we first started, it was difficult to get responses from plug-in developers (and it took us ages to get the ReWire SDK, for example). Now, to a much greater extent, people take us seriously, which is nice.

My personal favorite features — things I couldn’t live without include:

• Routing power: REAPER’s generic track type (tracks supporting all kinds of I/O including MIDI, routing to other tracks, feedback routing, etc)
• Convenience: I can easily download and install REAPER in some seconds or a minute, install it as a portable install to a USB drive
• Editing: non-destructive audio editing with auto crossfades (which was influenced by Vegas)
• JSFX: user-programmable audio and MIDI processing. This feature pre-dates REAPER, it was an earlier project I did for live use, and it is a joy for me to use (as a programmer). Also, seeing more and more people program makes me very happy.

There are probably a dozen more things that if you took away I would whine loudly, too, but these are the first that come to mind.

Reaper is available as a 60-day trial and comes in 32-bit and 64-bit versions for both Windows and OSX. Download the free evaluation version here.


You recently released Reaper 5 – what are some of the highlights in this version?

Some highlights of 5.0 were:

Keep in mind, though, that new things also come in minor releases. 5.01 and 5.02 fixed bugs and added new functionality (including support for RF64, WASAPI loopback recording, higher quality samplerate conversion, multichannel audio units, etc). We’re also preparing a new version which will include a MIDI-controlled audio looper script (which I find to be incredibly fun and powerful as a creative tool), linear (ramped) stretch markers, and other cool things.

In general, how do you decide what new features to include? And how’s the community involved in expanding what’s possible with Reaper?

We weigh a bunch of different factors, including:

• Implementation complexity / effort / maintainability (if something is easy and straightforward and doesn’t create a headache going forward, it’s more likely to get done)
• How much we want to use a given feature
• How much the community wants a given feature, as well as how clearly they can articulate what that feature should be
• How consistent that feature can be integrated into the rest of the program

We have to live with the code, and at the end of the day you need a strong vision to lead

The community (our user forums) provides a great deal of good feedback and suggestions, we are very grateful to them! Having said that, we have to live with the code, and at the end of the day you need a strong vision to lead.

Words from a Reaper fan, on what makes Reaper great:

Sound designer Jack Menhorn is a huge Reaper fan – and here, in his own words, is what’s so great about it:

“In the last few years Reaper has grown such a fantastic following and reputation it is hard to ignore. It is the little DAW that could (and can) do anything you need it to with a few settings and scripts. I personally love Reaper for the track parenting and routing more than anything else. Also add to that the ability to re-skin and you have me sold. The Winamp lineage is quite obvious in customizability and control; but I am still waiting for a Dragon Ball Z skin for Reaper like I had for Winamp.”


Are there any plans to include game audio middleware integration with Wwise or FMOD Studio, like Nuendo currently has?

For the most part we try to add functionality that is useful for as many people as possible. We haven’t ruled out working on such integration, but my preference is generally to make features that are as powerful and open-ended as possible for this sort of thing. For example, allowing rendering to be scriptable and very configurable.

The video editing options in 5 look fantastic. How deep are you planning on going with video capabilities in future versions?

Our primary focus is audio, but to the extent we can improve the video functions without getting in the way of audio (or carrying a ton of baggage), we will continue to do so. Working with video alongside audio is very useful! I’ve also enjoyed making my own videos using v5, so I’ll probably keep doing that. Reaper has a robust theme customization system. Are there any plans to integrate that more into the app for easier browsing and user customization?

Yeah, we have talked about having a resource browser which would allow you to pull all sorts of content (themes, scripts, JSFX scripts, track icons, loops, reverb impulses, …) from online and install locally. One of these days…

Before creating Reaper, Justin Frankel was one of the masterminds behind Winamp, one of the most popular media players on the Windows platform for many years. It supported a myriad of formats and pioneered a lot of features we now take for granted in modern media players. I personally still have it on my Windows machine, and use it from time to time – particularly for its great support of the retro tracker formats such as .mod, .s3m and .it. More on Winamp here. Winamp itself can be downloaded here

What words of advice do you have for users who are considering moving to Reaper from other DAWs? Any tips that’ll make the transition easier?

I think the biggest advice I could give is to right-click everything. Not compulsively or anything, just any time you want to tweak something in a slightly-more-custom sort of way. For example, if you tweak the pan on a track, and you wonder “what’s the pan law? or what’s the pan mode?” — right click the pan control, and you’ll be presented with configuration for that track’s pan.

REAPER supports a great deal of options and customization, but I would suggest avoiding diving in too deep at first — use REAPER as it is, gradually figuring things out as needed (usually they aren’t too far from where you’d look). 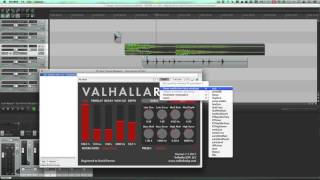 (thanks to @Vordio for the heads up about this video)

Overall, how does the DAW landscape look to you today – and where do you see things moving?

We’re just happy to be a part of it! The state of the art in computing, interfaces, controllers, etc, is fantastic, we’re very fortunate to be alive at this time. I’m sure it will continue to get even better (and cheaper), though perhaps those gains will be less meaningful as things are already so good.

A big thanks to Justin Frankel for the story behind REAPER, and to Jack Menhorn for his input and ideas. Want to try Reaper for yourself? Download a free trial here.

6 thoughts on “The Rise Of Reaper”