Sound designer David Farmer has worked on a number of blockbusters such as the Lord of the Rings and Hobbit trilogies, King Kong, Underworld Awakening, Cowboys and Aliens, God of War 2 & 3 and many more – and in this special A Sound Effect Q&A, he shares his approach to creature sound design. Read on for his thoughts on sources, tools and his personal favorite creature sound designs:

Hi David, what’s the first thing you do when you’re tasked with designing the sounds for a creature?

I find out if they need to speak most importantly, which fortunately most don’t. Right after that, how many different types of creatures are they, and how much screen time do they each have. Sometimes you have to define what is used to make a creature based on how much source you can come up with, where budget and time can be limiting factors. Also vital are what do they look like and what size are they? What is their role in the story? Are they friend or foe?

How do you source sounds for creature design – and what are some of the sources you recommend?

There are a handful of staple sounds that we generally find ourselves using, like tigers and lions. They are overused, and at the same time hard to overuse. They both provide a size and ragged aggressiveness that are just hard to find elsewhere. What they tend to lack though is that tonal projected bellow that gives a creature a distinct “voice”.

What’s important to listen for in the source sounds?

That central “voice” can be pretty elusive. There have been creatures over the years that re-defined this. I didn’t make either of these, but Chewbacca’s cry, and the T-Rex roar from Jurassic Park, really raised the bar when it comes to creatures. From what I’ve been told, the defining bellow of the T-Rex roar came from a single baby elephant sound, that only happened once.

You might just find that signature sound in a place you weren’t looking for it.

So when listening through sounds, it’s important to listen for parts that might stand out. They may be quite short, but you might just find that signature sound in a place you weren’t looking for it.

Other than vocalizations, what are some of the other sound components you consider when designing the sound of a creature?

The larger elements are what gets the most attention, but breaths, lip smacks, and smaller expressive pieces can be the real threads that stitch a creature together. No pun intended, these bits really breathe life into the final result.

For me personally, Smaug, particularly in “The Desolation of Smaug” has been my favorite creature I’ve ever done. And I’m not talking about the big action sequences, but rather the more subtle dialog scenes between Smaug and Bilbo.

For me personally, Smaug, particularly in “The Desolation of Smaug” has been my favorite creature I’ve ever done.

The most important part of that treatment was to take Benedict’s voice and make it sound like that was an actual dragon in the room speaking. Making it sound large but natural and authentic was the trick. So first I got all the dialog lines processed in place and what I determined to be believable. Then it was time to add other elements between Smaug’s lines to tie it all together. Those were things like alligator growls, but also some breaths and hisses that came from Benedict, and myself, vocoded with alligators that had hints of both human and alligator. This kept him alive both on and off-screen, and gave the spoken voice a place to come from, as well as go to. 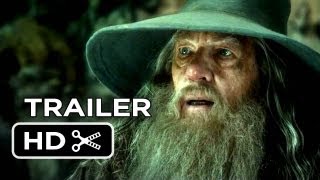 The trailer for The Hobbit: The Desolation of Smaug, featuring David Farmer’s sound design. Meet Smaug around the 2-minute mark

How do you make your creature sounds expressive? And how do you come up with a creature’s ‘language’, to give the impression it’s actually communicating?

Expression and communication are very time-consuming aspects. Projects really have to allow the designer extra time if they want creatures that are really expressive. Snarls and growls are much easier to come up with. It takes a lot of listening through animal recordings to find those little bits that will work as expression. It’s always best to have a sound that works well without having to manipulate it too much. But there are some things you can do to help things along, mostly to do with pitching. Samplers work well for performing pitch moves, but they can be pretty tedious to get sounds in and out of. Plugins like Waves Soundshifter Graphic, and Serato’s Pitch N’ Time can be used to add more performance. If a creature REALLY has to communicate distinctly, it often has to have elements of a human actor in it to get that expression. Most Sound Designers I know that do a lot of creature work, perform a lot of material themselves. If the budget allows, there are several voice actors around that can do some pretty amazing things with their voices. But since the budget doesn’t always allow this, I keep a microphone handy in the studio so I can record something new and specific quickly.


ARVE Error: The video is likely no longer available. (The API endpoint returned a 404 error)

Want to know more about creature sound design? Here are some more resources to explore:

Any processing tips for creature sound design? And let’s say someone wants to do some terrifying monster sounds – how would you recommend they go about that?

Like most things, there is no single way to do it. I switch up my approach all the time, because it’s hard to keep it fresh doing the same thing again and again, especially with what is really limited sources when it comes down to it.

I switch up my approach all the time, because it’s hard to keep it fresh doing the same thing again and again

Compression and saturation are both great for adding aggressiveness and size, but both contribute to a sound becoming “noisy” as well. You have to be careful with the noise factor, especially if the scene is sonically busy. I like to push processing too far, then pull it back a little. The most common note I still get, even after all these years, is “it doesn’t sound big enough”.
So my first suggestion is probably to make it bigger than you think you need to, because then it will “almost” be big enough. :)

A big thanks to David Farmer for these insights on creature sound design!

One thought on “Creature Sound Design Insights from David Farmer, sound designer on The Hobbit & LOTR”