We’re proud to release our first premier race ambience library, as we continue our exciting journey in sound experimentation with spatial audio. The Monaco Grand Prix 2018 is a genuine sonic document of the 76th edition of the Grand Prix Automobile de Monaco, the world’s most glamorous race.
If you’re looking for unique and modern race engine sounds and ambiences to use in your commercial, movie, television or game projects, here you’ll find lot of sounds with different perspectives to start building real and tactile sport soundscapes.
We made use of two favourite Ambisonics microphones: the Sennheiser Ambeo and the classic Soundfield SPS200, recorded across our Sonosax gear (SX-R4+, SX-R4, SX-M32) and their amazing preamps, which digested the high SPLs of the high-performance cars.
But that’s not all: you’ll also find extremely accurate stereo recordings made with a Sanken CSS-5, an A-B Stereo Technique configuration with a couple of omnidirectional DPA 4060 and, last but not least, a custom MS rig based on a Schoeps MK 41 supercardioid capsule (Mid), plus a MK 8 figure-8 capsule (Side), amplified by their respective CMC 6 units.
Looking for radical transformations? We recorded everything @ 96 kHz, so if you want to turn a pass-by into a dramatic spaceship pass, you’ll be free from any sonic artifacts. 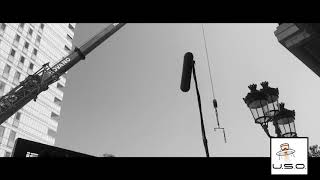 You’ll also find a spec sheet with a map of the circuit labeled with all the recording positions during the day of the race (May 27th) and also the 3rd Practice and Qualifying Sessions (May 26th). The folders and sub-folders are organized so as to be browsed manually, with a lot of photos and extra documents, but you’ll also find all the metadata embedded in the bwav files and in xlsx+csv files, as usual.

You can also transform the A-format files into your preferred standard (up to 7.1.4 surround) by using the free AMBEO A-B Converter and SoundField by RØDE plugin

If you want to use the 1OA b-format file directly in your VR/AR project, simply keep only the first 4 channels (WYZX) dropping the other ones (TRSUQOMKLNP)

The FuMa channel ordering is different from the ambiX (WXYZ with W -3dB compared to WYZX ambiX standard). You can easily convert ambiX to FuMa with Ambi Converter, a free utility by Noise Makers

Complete Edition: $ 199
Includes everything above

The first time I recorded the GP was back in, 2001 with my first pair of Soundman OKM binaural microphones. I’ve decided to include those vintage recordings in the library as a bonus. Make good use of it! Thanks to the Automobile Club de Monaco, I went back many years later with more microphones, more experience and most of all with my friends, Lorenzo and Simone, who helped me record the atmosphere of this special sporting event.
Matteo