Clicks is busting at the seams with a wide variety of buttons, switches, dials, pumps, and more. Whether you’re in need of realistic buttons for a dramatic movie scene, or designing mechanical sounds for the next AAA video game, these clicks are bound to have you covered. Both near and distant perspectives were captured for (nearly) all recordings in this library, which adds flexibility when matching these sound effects to picture.

Some of the objects in this library include but are not limited to: 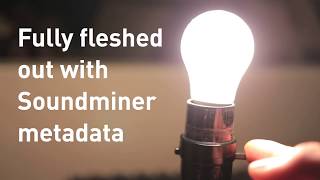 Capturing Weight:
From the start, we wanted to capture buttons and switches with lots of weight. This involved sourcing objects that were large and resonant. For certain objects (like computer mice), an additional recording pass was made on a wooden table to add body to the sound. Having objects like a food chopper or electric blender on the wooden surface added a delicious beefiness to the clicks. On the flip side, smaller clicks were captured, such as the volume adjust button on a cell phone, or the single ticks an electric iron makes when the temperature dial is advanced slowly.

Sweeteners:
A large swath of “sweeteners” were recorded to give designers more options for creating larger-than-life clicks. These include a large variety of sound sources to add extra weight (kitchen oven doors closing), or add complex brightness/crunchiness (old door knobs that were twisted and turned every which way).
Certain objects earned special attention/recording time. A personal favorite is the 1926 Underwood Portable Typewriter. Paired with a secretary’s desk from the same era, this vintage machine has incredible weight and complexity to it. Not only was the typewriter performed at a normal typing pace, but single key and space strokes were performed, alongside all the other actions of the machine such as loading paper, returning the paper carrier, ringing the bell, and more. As if that wasn’t enough, we added a contact microphone to these recordings, which yielded tons of great material useful for designing unique mechanical click sounds.

Near and Far:
All sounds were recorded at a near (~6″) and distant (~36″) perspective, providing a rich stereo image as well as a natural “airy” mono sound, respectively.

Mastering Matters:
The post process for this library involved selecting only the best takes, cleaning them of extraneous noise, sorting them into their respective categories (soft/hard, near/distant), and taking days upon days of fleshing out the metadata. This makes searching through the hundreds of files easier than clicking on a flashlight. It should be noted that these sound effects possess a wide dynamic range, allowing the end user to decide the amount of limiting/compression to be applied depending on the story being told.

Crispy, Clean, Delicious Recordings:
The Sennheiser MKH microphones paired with the Sound Devices 442 Preamp/744t recorder allowed for an extremely low noise floor and an excellent transient response. The MKH40/30 was used as a mid-side setup for the near perspective (providing a crisp on-axis sound) while the MKH60 was used as the distant perspective. Additionally, there were a couple of recordings made with a contact mic that yielded a unique sonic quality to the clicks. All material was tracked at 96kHz to allow for more detail when slowing down these mechanical clicks.

Audio Shade provides evocative sound effects that are meticulously recorded, edited, and embedded with rich metadata.
Approaching each library with the sound editor/designer in mind, we provide a wide variety of coverage, perspectives, and performances.
We also “trim the fat”  from the recordings so your time can be focused on the creative process.