Podcasts have transformed how we learn about what’s going on the in the world, and we’re finding even more sound-focused episodes by mainstream podcasts from Gimlet Media and Radiotopia.

In this roundup, you can hear about the importance of sound in UX design, how ringtones for phones have evolved over the years (almost into silence), and go on a strange journey that all started with a poorly-edited track of ambience (thanks to George Hufnagl for the recommendation).

You can also hear about the connections of music and meditation, Frank Preve’s career in the music tech industry, the massive amount of planning that went into the audio mix for the Eagles Super Bowl Parade, an interview with Paula Fairfield about the sound design of Game of Thrones, and a chat with Brian Schmidt about his incredible history in game audio. Happy listening!

Episode outline: ‘Sound is becoming more important in the world of design, especially as our devices shrink and we become less attached to screens. Wireframe speaks to sound designer Connor Moore and psychoacoustic expert Susan Rogers on the best ways to design for the ear.’

Episode outline: ‘Before we turned our phones to silent or vibrate, there was a time when everyone had ringtones — when the song your phone played really said something about you. These simple, 15 second melodies were disposable, yet highly personal trinkets. They started with monophonic bleeps and bloops and eventually became actual clips of real songs. And it was all thanks to a man named Vesku-Matti Paananen.’

Episode outline: ‘Composer Craig Shepard finds innovative ways to bring our attention to the ordinary through music and stillness. We discuss releasing assumptions and embracing mindfulness. as well as how to build trust through small gestures.

Craig Shepard makes music related to stillness. Growing up in Connecticut, he would go for long walks in the middle of snowy nights, stopping to listen to the sheen of millions of snowflakes hitting the ground. Recent projects include On Foot: Brooklyn, a 91-day, 780-mile walking project in New York, and Trumpet City, a mass outdoor installation that has been realized in Seattle, New York City, and in Zurich and Bern, Switzerland. He directs the Music for Contemplation concert series and organizes Creating Music Together workshops and retreats.’ Episode outline: ‘With a career that includes designing sounds for Ableton, Dave Smith, Korg, Roland, and Xfer, plus serving as Technology Editor for Beatportal.com, Francis Preve has carved a niche as one of the tech industry’s most in-demand sound designers. His work as a college professor in Austin, Texas, provides additional insight into how musicians of all skill levels interface with synthesizers, while his career as a technology journalist gives him a deeper appreciation of great product design and development.

Over the years, Preve’s musical output has included remixes for Dragonette, Orbital, Gabriel & Dresden, Sander Kleinenberg, and Dave Seaman. His original productions include collaborations like “Yin/Yang” with Wolfgang Gartner, “Glow Ballz” with Matt Lange, and “Get Down” with John Acquaviva & Olivier Giacomotto. He is also the founder of Symplesound, a soundware company focused on creating intuitive instruments and presets.

In 2017, Preve introduced his Scapes artform—entirely synthesized recreations of field recordings—which got the attention of the immersive sound design industry. He has presented and/or moderated panels on sound, synthesis, and production at conferences including SXSW, MacWorld, O’Reilly, and Project BBQ.’

Episode outline: ‘Halen had just moved in to his apartment when one night he hears footsteps coming into his room. Alex investigates.’

Episode outline: ‘In this episode of Sound Design Live I talk with Chris Leonard who is Director of Audio at IMS Technology Services. We discuss his sound system design and mix for the largest public event ever in Philadelphia covering 1 mile for the Eagles Super Bowl Parade, dealing with wide dynamic energy coming through a podium mic, and how to build relationships and get more work with Project Managers.’

Episode outline: ‘Paula Fairfield (‘Game of Thrones’ sound designer) chats with Gold Derby editor Matt Noble: ‘It was a huge ride’ on the backs of dragons!’ 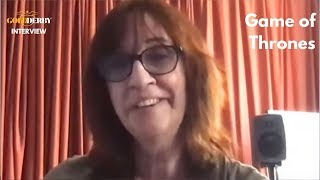 Episode outline: ‘In this interview, I spoke with Brian Schmidt on all things game audio & music. If you’re interested in making music for video games, this is the interview to watch as we go over everything! Well, we at least scratch the surface!

Brian Schmidt is the founder and creator of GameSoundCon. The 2008 recipient of the Game Audio Network Guild’s Lifetime Achievement Award, Brian has been creating game music, sounds and cutting edge game sound technology since 1987. With a credit list of over 130 games and a client list including Zynga, Sony, Electronic Arts, Capcom, Sega, Microsoft, Data East, Namco, SounDelux and many others.’