When it comes to taking independent sound effects to new heights, Collected Transients' Stosh Tuszynski is definitely up there with the very best. To name a few, he's done libraries that innovatively capture the sounds of extreme heat and cold, spinning and rotating objects, and combustion - and now he's done a library dedicated to the sounds of massive implosions.

It captures the sounds of 10 huge buildings and structures imploding, from multiple perspectives, and here's his story behind the making of the impressive Implosions SFX library: 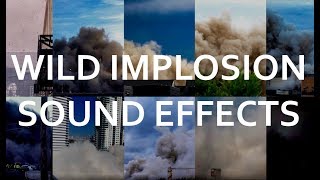 I was scrolling through my Google news feed one night when something piqued my interest. The roof of a stadium was to be imploded in Milwaukee, WI. I’d never seen an implosion and thought it might be a neat thing to see (and of course record!), so I made plans to drive up.

Before the drive, I did a bit of research via news articles and Google Maps. I scouted out a location I thought would work great for recording just outside the “exclusion zone” workers had mapped out.

I arrived about 30 minutes before the implosion was to happen and found a place to park. Before I got out of the car, I sat for a bit on my phone checking for any new stories about the implosion… making sure the implosion was still happening at the time I expected, and that nothing changed with the exclusion zone.

I came across one article that was just posted with a worker being asked about the implosion. I’ll have to paraphrase as I can’t find the article, but the worker essentially said “I just hope folks aren’t expecting some big show. You probably won’t be able to see much and and the explosion will just sound like a small firework.”

I was a little bummed reading that. I didn’t really care if I couldn’t see, but thinking that it would just be a tiny little “bang” rather than a big “BOOM” was a bit disappointing. Nevertheless, I was already there. No reason to turn around. I got out of the car and started walking to my planned recording location.

When I arrived, I was surprised to see a crowd of ~50 people standing exactly where I was planning to record. Without thinking about it too much, I set up my mics and camera and began testing things. The mics we’re sounding fine. The memory card had plenty of room. The camera angle was nice. The batteries were full. It was about 10 minutes before detonation when I hit record.

Until that point, I somehow had been oblivious to one of the toughest aspects of recording implosions: Crowds

I stood there among a now growing crowd of people monitoring my mics. For whatever reason, it took a couple minutes of me listening to the ambience and crowd chatter to put two and two together: When big things happen, people like to cheer… and people cheering probably wouldn’t be the best element to have so close to my mics when the implosion happened. Until that point, I somehow had been oblivious to one of the toughest aspects of recording implosions: Crowds Crowds begin to gather at the University Hall implosion in Charlottesville, VA

I’ll blame not coming to this realization sooner on having to get up early. I’m definitely not a morning person! But not thinking about this in the earlier planning stages was simply a result of never having recorded an implosion before. I’m (obviously) not the only person who thinks seeing an implosion is cool. Lots of folks read the news, so lots of folks are going to show up.


I was greeted by a wonderful sight when I arrived. Not a single soul to be seen. On top of that, I now had a couple huge buildings between my microphones and the crowd I was in before, so cheering wouldn’t be an issue

With now just ~8 minutes before the implosion, I quickly went back to my familiar resource: Google Maps. I frantically panned around in satellite view, looking for alternate locations to record. I found a couple right away, but quickly surmised the views were too good, so lots of people would be there. I began looking for less likely locations and found one in a nearby alley. The view was just alright, but it would get me ~50 feet closer to the stadium, which never hurts when sound is the main goal. Now, with about 5 minutes to go, I hastily grabbed all my gear, and hobbled over to the alley.

The demo track for the Implosion SFX library

I was greeted by a wonderful sight when I arrived. Not a single soul to be seen. On top of that, I now had a couple huge buildings between my microphones and the crowd I was in before, so cheering wouldn’t be an issue. I quickly sat my gear down, set up my mics, bent down to hit record, and just as I was about to stand up… “BOOM”! Seconds after the Bradley Center stadium roof in Milwaukee, WI was imploded

A massive concussive blast froze me in place. This was no firework. Not even close! I heard glass shattering and metal falling. A huge cloud of dust and debris formed and began blowing my direction. I kneeled there in a little bit of shock. First for how loud the explosion was, and second for how close I came to missing the implosion. I’m not exaggerating about the timing. The raw recording has about five seconds of ambience before the implosion, and two of those are from pre-record.


A massive concussive blast froze me in place. This was no firework. Not even close! I heard glass shattering and metal falling. A huge cloud of dust and debris formed and began blowing my direction. I kneeled there in a little bit of shock

A huge feeling of joy came over me as I packed up before the dust got too bad. I think I smiled the entire walk back to my car. I got in and realized I should probably check playback as I didn’t even get a chance to look at my meters. I hit play and was happy to see the levels were great. Luckily I had recorded some pretty loud things with the same gear, so I was well prepared in that regard.

After that, I was hooked. The rapid sequence of events gave me quite a rush! It was one of those moments where I instantly realized I wanted to make a sound library. And over the course of about a year, that’s what I did! Cooling Towers ready to be imploded in Somerset, MA

For each of the nine other building implosions I attended, I did quite a bit more preparation than I had for the first. I didn’t stop at finding one location to record, I found four or five possibilities for each distance I planned to record at. I showed up at least a day before each implosion and surveyed the potential locations for their positives and negatives.

We interviewed Stosh Tuszynski for the A Sound Effect podcast about the making of his Thermal Flux sound effects library – hear the interesting story behind that one below – the interview starts around the 4:40 mark.

Other SFX highlights from Collected Transients:

Even with all that, it never failed that on the day of each implosion I was thrown massive curve balls. Unannounced streets would be closed so I couldn’t park near by. Locations would be closed off, or I would get kicked out at the last minute and have to scramble. Random crowds would show up to my prime spots. What was left of the Pasadena State Bank building after it was imploded in Pasadena, TX

However, with each implosion… with each curve ball… I got more bold. I hid my mics in bushes, cars, alleys, and rooftops. I left thousands of dollars of gear sitting in public locations with no visibility for hours at a time. Multiple times, I talked security/police into letting me leave my gear inside the exclusion zone. One time close enough that the shock wave destroyed a microphone! I waded across a tiny river at 3am in 40°F temps to hide mics in a tall grass field. All of this, just to avoid crowds and get the best recordings possible.

It also never failed, that when each implosion was finished, I was overcome with that same feeling of joy I had after almost completely screwing up the first one 😉

A big thanks to Stosh Tuszynski for the story behind his new Implosion SFX library! Be sure to check out the full release below:
Implosion
Here's Collected Transients' own description of the library: Implosion is a sound effects collection of buildings being destroyed with explosives. It features 10 unique building implosions recorded across the country.