Popular game development platform Unity recently released the full version of Adam, a real-time presentation of what Unity is capable of – built entirely in Unity. But it’s not just a tech demo; it’s also a great short in its own right, with some excellent sound design.

I was really curious to hear the story behind the sound – and thankfully, the man behind it, Swedish sound designer Aleksander Karshikoff, was happy to share it.

Below, he highlights his thoughts and approaches behind the film’s sound design, and demonstrates some experimental robotic breathing techniques. And if you haven’t seen the film yet, here’s your chance as well! 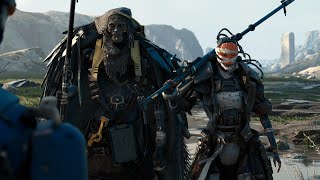 Hi Aleksander, how did you get involved with the Adam film, and with Unity?

It was through my colleague and friend Max Lachmann from Pole Position. He was the one who took me on board and introduced me to Unity’s demo team.

What was your overall vision for the sound design?

Well, the brief we got from Vess, the film’s director was simple: even though they look like robots, they are human beings in a robotic body – make them as human as you can. This was the mission and it meant that sonically we needed to get as far from the robotic-sound as possible. An impulse that wasn’t easy to resist at first. Regarding the overall feeling of the world depicted, we aimed for an outdated modern world, something that was hi-tech many decades ago, but now felt somewhat archaic.

What was the biggest challenge in getting the sound right?

I guess Adam was the biggest challenge. Since metal, pneumatic and electric sounds all emphasize the robotic feel, we went for different kinds of plastic and no motorized/electronic sounds at all. A lot of the sounds that Adam makes originate from a Rubik’s cube – a toy quite potent, it turns out!

A lot of the sounds that Adam makes originate from a Rubik’s cube – a toy quite potent, it turns out!

Then, of course – the breathing… It took quite a while to decide how it should be. But at the end the decision favours the perception of Adam as human, which meant letting him breathe as a normal human being, despite the logical gaps (picture-wise, not story-wise) that come up with this approach.

The reverberation of the breathing (making it sound as if it comes out of a more hidden part of Adams body) is a way of dealing with those problems, but at the and of the day this was the most effective way to make the audience understand that Adam isn’t really a robot, but something else!

An experimental version of Adam’s breathing, later abandoned for a more human-like sound (PS: Don’t try this at home)

Did the fact that it was rendered in real-time present any challenges in terms of sound? And from a technical perspective, how are the sounds implemented into Unity?

Although it is rendered real-time, the sound was made against a rendered file, more or less as if it was a normal film – with the difference that character action, camera angles and movements, textures and fabrics were subject to change at any given moment – and this was the case because the sound work was done parallel to the coding. The correct implementation of the sound into Unity will be done only in case an interactive demo is released.

Popular on A Sound Effect right now – article continues below:

GET THE MUCH-LOVED A SOUND EFFECT NEWSLETTER + 40 FREE SFX:
Just enter your details below to get the newsletter and 40 free sound effects (soundlist):

Where did you source the sounds for the film? Did you do a lot of custom recording?

Most of the sounds we took from Pole’s own libraries, such as ambiances, ambient effects from interiors of planes and tanks, hydraulic and pneumatics, alarms etc, and hard fx such as the gunfire and everything that come along with it.

Then we made additional recordings of specific effects, mainly sounds that were very specific to the depicted characters and of course foley.


Want to know how Adam’s graphics, animation and VFX were made? Here’s how:

Find out how Adam’s visuals were created, in this in-depth presentation by Zdravko Pavlov, Robert Cupisz, and Krasimir Nechevksi: 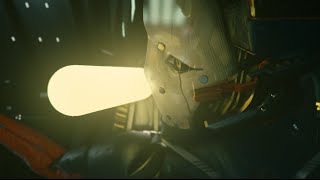 How did the collaboration between you and Pole Position come into place – and is this something you’ll continue in the future?

We had been working together a while back on a feature film, “Cirkeln” (The Circle) where I was sound supervisor and Pole where involved doing some sound design and field recording.

When they where asked to do the Unity demo they contacted me, seeing this as a step to be able to take on more film, cutscene and trailer work. It has been a great pleasure to work with Pole and I certainly hope that our collaboration will continue. New projects are being planned and the future seems bright!