Carl Malherbe is the creator of the Pura Vida tropical sound effects library – a library that features an excellent selection of tropical forest recordings, captured in Costa Rica. I was curious to hear more about the library, and here’s the story behind Carl Malherbe’s jungle recording adventure:

Hi Carl, please introduce yourself and Pura Vida:
Hi! My name is Carl Malherbe. I have a passion for sound and music. I’m currently working as a sound designer as well as a voice-over recording engineer for video games, and in my spare time I like to do field recording. Pura Vida (which is the motto of the people of Costa Rica) is a sound library compiling the recordings I made from my trip to Costa Rica.

Can you tell a bit more about what’s in the Pura Vida?
The library features recordings of Howler Monkeys shouting at dawn, bats, various exotic birds, various insects (cicadas, crickets, swarms of flies), recordings of water streams and waterfalls, ambiences from San Jose and various other cool sounds, like squeaking doors, jungle footsteps and the engine of a motorboat.

A taste of the sounds included in the Pura Vida library

How did the idea come about for the library, and what sort of planning went into making it?
In March 2015 I went on a trip to Costa Rica. I was aware that Costa Rica was a well-preserved place for biodiversity. It harbors 6% of the world’s biodiversity and 25.6% of its territory is national parks and ecological reserves! So I knew that there would be a lot of cool nature sounds to record – in human-noise-free zones. Concerning the planning, the trip wasn’t driven by the sounds I wanted to record. So I took a convenient rig that I could take easily wherever I went and kept my ears opened to hear for anything worth recording.


How did things go when you actually got out there to record? Did everything go as planned?
Tropical forests aren’t the most comfortable environment to capture sound. Aside from the heat and the humidity, as one would expect there are tons of mosquitos. The first time I went out to record, I was wearing flipflops, shorts and a tanktop. Needless to say I quickly got aware of the mosquitos … When you are standing still for more than a minute, you quickly get numerous bites and it becomes impossible to stand still and not to scratch. Afterwards, when going out field recording I dressed up in order to leave as little skin out as possible, and covered the remaining skin with Mosquito repellent.

Gear-wise I took the most convenient rig I could because as I said the travel wasn’t organized towards field recording so I had to assemble it fast and not struggle moving it. I used a Zoom H4n in which I plugged a Rode NTG3, in between I plugged Triton Audio’s FetHead, which is a small preamp that adds 27dB of clean gain. I also used the H4n’s built in XY stereo microphones. My approach was to get a clean mono signal to be the meat of the sound and to later gently mix it with the stereo signal to widen it a bit. 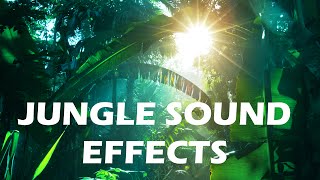 There are lots of excellent animal recordings in the library, but one thing that stands out in particular are the howler monkeys. How did you get such good recordings of those?
It was mostly down to luck. I was staying in a remote hotel near the jungle. When arriving at the hotel, I heard those large growls very loudly and the receptionist said: “Don’t mind, there is a family of howler monkey living nearby”. I had already heard howler monkeys during my trip, but from a very long distance, coming deep from the jungle. I thought that they sounded awesome, and this howler monkey family was only meters away! During my first night I could literally hear them crawling above my bungalow. I noticed that they shouted at dawn and at dusk and that they spent the rest of the time sleeping, like most of the tropical wildlife. I figured the best time to record them to avoid human noise was at dawn. So I woke up around 4:30 am and went in the jungle and I just waited for them to shout. I tried to remain inconspicuous in order not to scare them away. The result is what you hear in the library.

From listening to the library – and looking at your teaser video – it looks to have been quite an adventure. What’s been the most exciting thing about doing the library?
It’s been a great journey. I saw and heard a lot of cool stuff. The most exciting part of the library was definitely recording it. Waking up early, pressing the record button and waiting for something cool to happen. When it did, it was the most exciting part. Another nice thing was that wandering alone deep in the jungle and doing some climbing and trekking made me feel a bit like an adventurer :)

Any lessons learned making the library that you’d like to share with other field recordists or SFX creators?
I made the mistake of not taking a tripod or a boom pole for convenience and I regret it. I didn’t realize standing still for 30 min holding a 2 kg rig in the heat and the insects would be this challenging. I wasted a few good takes because of this. I’ll definitely bring a tripod with me on my next field recording trip. Another advice would be not to be cheap with memory. If you use a small recorder take the best quality SD cards with a large memory and fast write/read speed. Because when you’re recording a great take, especially when recording things as random as wild animals, you don’t want to be out of memory or having corrupted data.


A big thanks to Carl Malherbe for the story behind his Pura Vida library! Get the full library below: