GRIP: Combat Evolved is a spiritual successor to the 1999 Playstation classic Rollcage, which means you can drive at insane speeds that defy gravity as well as foil your friends and foes with heavy artillery. Last year it was released on PC, Xbox One, PS4, and Switch, and it is now available on Xbox Game Pass.

In this short interview, we speak with Tavis Wait and Yoshi Gans, two of the game's sound designers, about how they got involved with the project and what approaches they took to designing the beefy engine sounds and Mario Kart-style ordnance of these lightning-fast cars. 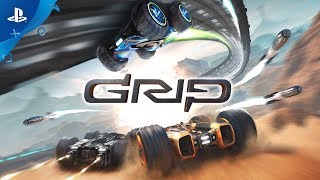 How did you get involved with the project?

Tavis Wait (TW): My involvement sparked from providing an improvement to the Warlander engine sound loop as a fan contribution. Chris contacted me later on to see if I’d be interested in doing more engine sounds and it sort of snowballed from there.

When the cars are idling, it sounds like you used the growl of some pretty aggressive and fancy vehicles. What supercars influenced your design?

Most of them come from the meanest, dirtiest V8 muscle cars like the Plymouth Cuda and Dodge Charger

TW: There are a wide variety of inspirations for the sounds but most of them come from the meanest, dirtiest V8 muscle cars like the Plymouth Cuda and Dodge Charger. The rest are combinations of futuristic ‘spaceshippy’ sounds, exotic supercars like the Audi R8 V10, and historic rally cars like the Lancia Stratos.

Yoshi Gans (YG): I did a few back when I was a student doing my internship and one on commission later on. The ones from my internship were from wildly different sources. For example, the Cygon ones are almost fully from experimenting in my DAW. I took one of the layers from the normal engine sound, pitched it down and slowed it down a bit as a base sound, and then I layered it with others that eventually made up the Cygon idle sounds.

Another one I worked on was the Vintek Tank idling. It was an interesting one, because I was working with the sounds of another sound designer that had previously worked on the project. I had to re-use a lot of his sounds of the original engine and then layer them with an idling engine, which in this particular case was a rat rod, to make them sound like they belonged to the right car. 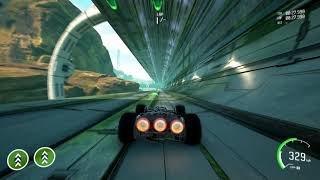 Did you find inspiration from classic racing series like Forza or Gran Turismo or destruction franchises like Twisted Metal or Burnout?

TW: My main inspirations for the sound design came from Dirt Rally and Elite Dangerous. If any of my sound design can even hold a candle to those titles then I’ve done my job.

Did you use any synthesizer plug-ins to create the sounds of the vehicles as they tear through their gears or employ power-ups? Did you intensify the engines in the different play modes?

TW: I used every kind of synthesis under the sun to make sounds; subtractive, additive, granular, wavetable, sample-based, you name it. Many of the sounds are combinations of purely synthesized sounds, recordings, and processed samples. Of course I have to ask – which was your favorite car to design? I personally liked the gruffness of the Pariah Jackal.

TW: My favorites are from both ends of the synthesized to sample-based spectrum. The Spectre X-1 is purely synthesized and was a lot of fun to make and tweak. The Pariah Bandit is a much more grounded and raw sound of a Lancia Stratos, and I really enjoyed getting it to finally click.

YG: Well, it’s a controversial sound, but I liked the design process of the Vintek Rogue. I learned a lot from that one, such as that it might be good to add new depth to a sound per gear to make the final gear a culmination of power, or how to use sparse resources to make something.

The iconic sound of an F1 car passing by is engraved into everyone’s memory, but making that sound into a consistent enough pitch … was very challenging

I did not have the resources to purchase an expensive sound library of F1 cars to truly get the sound of an F1 car into the mix, so I used whatever decent free sounds I could find from all over the internet of F1 cars passing by. The iconic sound of an F1 car passing by is engraved into everyone’s memory, but making that sound into a consistent enough pitch to be used in a looping engine sound was very challenging – especially as a student sound designer who was just starting to make sense of my DAW.

Do the tire selections or track surfaces have any effects on the tire squeals? How did you handle the reverb of the different environments?

YG: Making new tire squeals was one of the first things that Chris asked me to work on, actually! The track surfaces have an effect, such as sand, snow, asphalt and metal.

TW: Tire selection doesn’t change any of the squeals, but we have different sound effects for all the different surfaces in the game. For reverb in the environments, UE4 provided us with most of the tools we needed to incorporate different levels of reverb and sound reflections for different types of spaces in each level. With all the explosions and crashes of the combat, especially during the death matches, what sound libraries did you use and how did you go about mixing the effects so they wouldn’t be overbearing?

YG: While I didn’t make a lot of explosion or crashing sounds, the ones that I used were usually a mix of Boom Library and one that came from a Humble Bundle, I think. Good stuff.

TW: Credit to our programmer, Rob, for this one. He put quite an effort into making the game engine only play the audio for the things that are important for the player to hear. If we just let the game play sounds as if it were a simulation, we would hear an awful cacophony of chaotic noise because of how much is happening at once.

Thanks for speaking with us! For our readers, please check out GRIP: Combat Evolved on the Caged Element website.

A big thanks to Tavis Wait and Yoshi Gans for giving us a behind-the-scenes look at the sound of GRIP: Combat Evolved – and to Adriane Kuzminski for the interview!