Get the sounds of an authentic WW2 bomber plane: This library delivers a recording of the historic twin-engine World War II bomber, the B-25 Mitchell with the air-cooled 14 cylinder Wright R-2600 Cyclone radial engines. The recording cover two stationary ground runs and a flying session.

The library also includes some foley, such as bomb door opening and closing, flaps, horn, breaks and switches, and engine maintenance with mechanics pumping oil and electrically turning the propellers. Finally it includes the plane being towed. 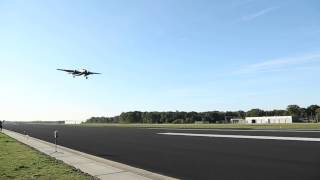