One of the really popular libraries here at A Sound Effect has been Detunized’s Around Bridges, a collection of sounds recorded on bridges in Dresden, Germany – using contact microphones. That approach produced a very interesting, almost otherworldly collection of sound effects.

Now, SFX creator Stephan Marche is back with a much larger library, this time capturing the unheard sounds of Berlin bridges. Here’s the story behind this unique SFX library:

While recording Around Bridges Volume 1 I discovered the vast sonic potential of steel constructions and bridges in particular. I soon realized that one single library would not cover all possible sounds.
For the new Around Bridges Volume 2 library I wanted to find bridges that are of a different construction and age so that they could form a suitable supplement to the sounds of Volume 1. Berlin is a perfect place for such discoveries.

Berlin has 100s of bridges of all sizes. Sometimes it is even called the “Venice of the East”.

Having a dense network of public transport systems (tram, metro, underground) and situated on several rivers, Berlin has 100s of bridges of all sizes. Sometimes it is even called the “Venice of the East”. So I went out to more than twenty places and composed a library with 10 different types of bridge constructions. 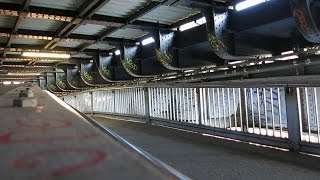 What bridge types did you record? And how does the construction of the bridges affect the sound?

I picked out a handful of interesting bridges that lead across rivers, some train bridges that are constantly excited by ordinary road traffic below and I also went out to record along those old metro lines that were built in the beginnings of the last century.
The best impact sounds I gathered from low profile post-war steel bridges that are mounted on just two pillars. Whenever a car hits the expansion gap they start to oscillate like a large string. Once excited they almost never go to rest due to the constant traffic flow. In order to capture decent single bangs I had to go there in the early mornings before the rush hour.
It was a bit frightening sometimes because generally the areas below city bridges are covered by disgusting dirt and pigeon excrements. Also I had to watch my steps to not disturb any homeless people who might be sleeping there. Anyway, the impressive Bangs in the “Road Bridge Steel Sections” folder are the worthwhile reward for these excursions.

So what does it all sound like? And do any of the sounds stand out to you in particular?

The most mysterious sounds I captured along the steel rivet construction lines where the yellow underground trains that go above street level. These railway constructions are less elastic and therefore do not resonate much, but with proper gain stages you can extract interesting squeaks and clanks of approaching and passing trains.

Listening to these sounds with headphones and my eyes closed, I immediately felt like I was sent a hundred years back in time.

I was really fascinated because listening to these sounds with headphones and my eyes closed, I immediately felt like I was sent a hundred years back in time. The “Metro Bridge Cross” folder is a good example of these.

On an early Sunday morning I even managed to record singing birds and a church bell only with contact microphones attached to such a metro line. I used two cascaded Shure FP33 in order to get the huge gain that is needed for this. Audio Engineers please don´t blame me for building noise stages! Izotope RX helped a lot ;-)

Some of my personal favourites are contained in “Metro Bridge Iron” folder. They sound like they’re time-stretched but in fact they are not, they are gathered in the real world instead! At some places along those ground-level metro lines I found some narrow steel bands connected diagonally between the pillars. You could hear the train approaching even two stations before and those bands resonated like hell.

So all in all it was really fun to record along the bridges of Berlin and dive into this huge resource of sounds that probably almost none of the thousands of people passing by daily will ever recognize.

A big thanks to Stephan Marche for sharing the details behind his new library. You can currently get a very special bundle of both Around Bridges 1 and 2 – and save 30% off the regular price. You’ll find both the stand-alone and bundle versions right here.