Unravel Two is a beautiful new game from Swedish developer Coldwood Interactive, and here, creative powerhouse Håkan Dalsfelt shares details on how he created a calm sonic environment for the Yarnys to play in.

He talks about the sound tools and tech, and the unusual creative collaborations that helped to define Unravel Two:


Yarny is back in a new puzzle-platformer game, Unravel Two, developed by Sweden’s Coldwood Interactive and published by EA Games. This time around the beloved red Yarny is joined by a friend — a blue Yarny. And when I say ‘joined,’ I literally mean joined. The two characters are attached by a single string and therefore must support one another in order to traverse obstacles and avoid dangers.
This game focuses on co-op play, which can be experienced as local two-player mode (two players on the same console can drop-in/drop-out of the game), or as single-player mode where one player must perform moves for both Yarny characters. In the spirit of cooperation, the game is cross-platform — available for PC, Xbox One, and PlayStation 4.

We join up with Coldwood Interactive’s Håkan Dalsfelt to learn how Unravel Two’s gameplay and sound are woven together since Dalsfelt is (k)not just involved with the game’s audio. He also had a hand in the level design, puzzle design, programming, and more — roles he also had on Unravel (2016).

Here, Managing Director/Senior Programmer/Designer/Sound Designer Dalsfelt talks about the benefits of being involved with multiple aspects of a game, and discusses the creative and technical challenges he faced on this one. He also discusses the aesthetic direction for the sound of Unravel Two, and how he collaborated with the score’s composers Frida Johansson and Henrik Oja. 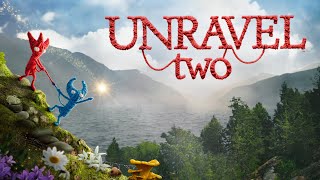 On Unravel, you were a designer, sound designer, and audio programmer. But the end credits on Unravel Two have an interesting message. It says, “…the team has moved away from conventional hierarchies and let consensus rule.” In light of that statement, can you tell me about your role on Unravel Two? How does your experience and contribution to this game compare to Unravel? Håkan Dalsfelt (HD):  We’re such a small team so most of us who work here have always been involved in a lot of different aspects. We just felt it became a bit silly to give unique titles for every “area” that you’ve been involved in. But, in conventional credits for Unravel Two, you would find my name under the following categories: Design, Sound Design, Level Design, Puzzle Design, Programmer, Audio Programmer and Office Manager.

My role on Unravel Two has been quite similar to Unravel. The biggest difference is that I’ve been less involved in core gameplay design because we hired a dedicated game designer, Joshua Baldwin, for Unravel Two. So instead, I’ve been more involved in level/puzzle design.

What are the benefits of handling both the visual/gameplay aspects and the sound? What are some challenges to this dynamic?

HD:  The benefit is that you know how everything works (or at least you’re capable of finding out quickly), so it’s easy to find the correct spot in the code/scripts where a sound should trigger. I don’t need programmers making interfaces for me and I can fix physical materials on assets and so on.

The biggest challenge is that since I know how most stuff works I’m the perfect guy to ask when there’s something that needs a quick fix or tweaking. So it tends to be lots of “other” work, which is fun but it’s easy to lose focus.

In terms of aesthetic, what was your approach to the sound on Unravel Two?

HD:  Realistic, calm and discreet. I imagine that the yarn characters are sneaky creatures so I want it to be discreet.

The goal is that you can leave the game sound on without it being annoying. Another approach is that I want the music to be a bit more up front than it usually is in games. That’s because the rest of the soundscapes are very ambient (including character sounds) and leave room for the music. I’m personally not fond of traditional 2D-platformer audio since it’s often very focused on the characters and just sounds too “gameish.” I want the game to sound more like a nature documentary. Did you record any specific sounds for this game? If so, can you tell me about the recordings you captured?

HD:  I use sound libraries for most sounds but I did some field recordings for some of the ambience. For instance, in Unravel Two I captured sounds for the “Rapids” level.

When I do field recordings, I don’t use any fancy equipment. I use my old Zoom H2n, which I often keep in my pocket.

What sound libraries were helpful on Unravel Two?

HD:  For Unravel Two, I really like the stuff from The Recordist. All the physics audio, fire, and plenty of other sound effects are from his libraries. I also use sounds from the Steam Machines library from Moon Echo Audio. That was helpful for the “Industrial” level.

The music in Unravel and Unravel Two is so lovely. It’s one of the defining features of these games. Can you talk about your collaboration with composers Frida Johansson and Henrik Oja?

HD:  Yeah, I really love the music as well (and that make my life a lot easier).

We gave Henrik and Frida the challenge to compose more modern music but still use traditional Swedish folk music instruments.

The theme for Unravel Two is youth, so we wanted the music to reflect that mood and be more modern and less folk music. But still, since the music from the first Unravel has been praised, we wanted the new music to still feel like Unravel.  So we gave Henrik [Oja] and Frida [Johansson] the challenge to compose more modern music but still use traditional Swedish folk music instruments.

It’s been really easy to collaborate with Henrik and Frida since Henrik has his studio just across the street from our office. We can arrange quick meetings if something needs to be addressed or if anyone of us needs feedback. They gave me midi-sketches early on so I had all of that in place when the final music arrived.

Near the end of the project, we even sat together to tweak all transitions to make both me and the composers satisfied. I came at it from a game designer-perspective and wanted the music to amplify certain events in-game. Henrik and Frida wanted it to sound like “good music,” even if the transitions sometimes must be a bit abrupt. Additional sound was provided by Ljudbang. Can you talk about their contribution to the game? How did you collaborate with them on the sound?

HD:  For Unravel Two, they provided audio for the intro and outro movies. We’ve worked a lot with Ljudbang through the years and they are really easy to work with. For this project, there wasn’t much collaboration needed; we just sent the movies and asked for audio and they returned the final tracks.

Creatively, what was the most challenging aspect of the sound on Unravel Two? Why? What was your solution?

HD:  The challenging part of Unravel Two (and Unravel) was to create a good balance between character sound effects and the rest of the soundscape. Since I want it to be realistic, I don’t want the character sound effects to be “too much.” Instead, I want it to sound like a small yarn character in a big world. Still, it’s important from a gameplay perspective that you get an auditory response when performing different interactions, so that’s a challenge.

Note: when a small yarn character is in a forest fire or in a roaring rapid, that’s extra challenging :) Can you tell me about your editorial process? What program do you edit in? Do you use middleware, or does Coldwood Interactive have its own proprietary tools for sound?

HD:  We use FMOD Studio as middleware. I’ve been using FMOD in all Coldwood’s games. I think I’ve used it for 15 years now. But this is the first project I’ve used FMOD Studio. Earlier (including Unravel), I’ve used FMOD Designer and I must say Studio is like heaven, especially when working with music and bigger/longer sound effects for cutscenes and such.

For editing, I use Audacity. I’m not doing any advanced stuff so that’s perfect for me. I can do resampling, some trimming, add fades etc.

Unravel Two uses the PhyreEngine game engine. Was it a good fit for the sound team?

HD:  We’ve made some modifications to PhyreEngine so it fits our needs. For example, we use Autodesk’s Maya as a level editor and we made our own plug-ins so we can run the game from Maya and do real time tweaking.

We’ve made our own interface for sound events so PhyreEngine is only used for low level and file handling. Since the sound team only consists of me and I’ve made the interface, I must say it’s perfect! =)

From a technical standpoint, what was the most challenging aspect for sound? What was your solution?

Additionally, there are some machines that are animated with mathematical expression. Making those sound good was a bit of a challenge.

What are you most proud of in terms of sound for Unravel Two?

HD:  It’s the stuff people don’t notice, e.g. there are many music transitions in this game and I put lots of work into making them perfect so people won’t notice.

That’s the trouble with game audio; people are quick to notice if something sounds wrong. So if people don’t tell you anything, then you know that the audio is fine.

A big thanks to Håkan Dalsfelt for giving us a look at the intricate sound of Unravel Two – and to Jennifer Walden for the interview!