Posted May 16, 2019 by Asbjoern Andersen in Film sound


Under the moniker Melodysheep, composer/filmmaker/editor John D. Boswell has created a truly mind-blowing video called Timelapse Of The Future: A Journey to the End of Time.

It's been viewed almost 10 million times on Youtube, and focuses on the life and death of our planet, solar system and, ultimately, the universe - based on our knowledge and predictions about the universe and what awaits.

In terms of sound, the video blurs the line between sound design and music, and in this exclusive interview, John Boswell shares how he created the sound of the future. You of course also get the chance to watch - and hear - the whole mesmerizing video below:

Interview by Jennifer Walden, images courtesy of John D. Boswell
Please share:
Watch the full ‘Timelapse Of The Future: A Journey to the End of Time’ below:

For years, Melodysheep (composer/filmmaker/editor John D. Boswell) has been creating tracks that marry electronic music and science, often using auto-tuned science lectures as the vocal aspect of his songs. The result is enlightening, often beautiful, and sometimes melancholy.

In his latest project, Timelapse Of The Future: A Journey to the End of Time, Melodysheep goes to the darkest place, the end of all time. It focuses on our dying sun, our dying universe, black holes and even the death of black holes. It travels to a time far in the future when time itself is meaningless.

Boswell was more than composer/sound designer on Timelapse Of The Future. He created the project concept, handled editing, and visual effects. Here, he talks about what inspired him to create TIMELAPSE OF THE FUTURE, how he constructed the narration, and how he brought music and sound design together to support it.

How did this project come about? What inspired you to create Timelapse Of The Future: A Journey to the End of Time?

John Boswell (JB): Years ago I learned about how our sun is half-way through its life; that in 5 billion years or so, it will expand into a red giant, and likely engulf the Earth, destroying all evidence of our existence.

We can look around and be fairly certain that everything we see will be charred to a crisp and then swallowed by a giant ball of superhot plasma. It puts life into a new perspective. But it also begs the question, what happens after that?

To me, this alone is a mind blowing piece of information — we can look around and be fairly certain that everything we see will be charred to a crisp and then swallowed by a giant ball of superhot plasma. It puts life into a new perspective. But it also begs the question, what happens after that? What happens not in 5 billion years, but 5 trillion? The answers are out there, but they are piecemeal and not strung together in a compelling way. So I took the opportunity to create something unique that highlights our collective predictions about the future, both short-term and long-term.

Behind the sound for the mind-b­lowing ‘Timelapse Of The Future: A Journey to the End of Time’

What was your workflow on this project? Where did you start and what came next?

JB: The workflow began first with research and constructing the timeline; this would serve as the scaffolding around which the visuals and music would be built. From there, I broke down the piece into several distinct sequences — the fate of Earth, the death of stars, the degenerate era, black hole era, and so on. Each of these periods in the timeline had its own mood, which then had to be teased out through music and visuals. For the opening sequence, when time begins to tick, I wrote the music to the rhythm of the counter — 120 beats per minute — increasing in intensity to highlight the accelerating rate of time travel.
For some sequences, I started with music to set the mood and then filled in visuals; other times it was the other way around. The final step was to smooth out transitions between sequences and create a proper sound mix.

Dialogue-wise, how did you piece this narrative together? What was your north star?

JB: The sound bytes came from all over the place — little pieces I discovered in my months of research.

It was important to me to have moments where the music, visuals, and sound effects could breathe, and the viewer could take in what they have seen

Once I had the timeline broken out into distinct sequences, I could fit the samples within their respective sequence, seeing how much information could be fit in without overloading the viewer with facts. It was important to me to have moments where the music, visuals, and sound effects could breathe, and the viewer could take in what they have seen.

Music-wise, what program(s) do you like to compose in? Any virtual instruments or sample libraries that were integral to this soundtrack? Any outboard gear?

JB: It’s not ideal for scoring work, but I am using Ableton Live. I have tried many other DAWs and the fact is that Ableton is simply the fastest for my style of work. I like to experiment, throwing a lot of things at the wall and seeing what sticks. Ableton is no-nonsense and lets me get ideas down the fastest.

For this project, I used a lot of Spitfire libraries, and a lot of Omnisphere, as well as a variety of other stuff like Komplete and some libraries from 8dio. My only hard synth is a Moog sub-37. I typically work in-the-box because it allows me to work faster and iterate more frequently. 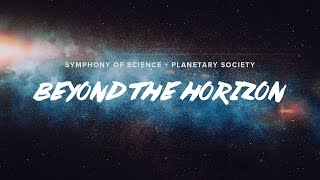 ‘BEYOND THE HORIZON – Symphony of Science + The Planetary Society’ – another one of John D. Boswell’s works

How did you want the music to make the viewers feel?

JB: For this piece in particular, I designed the soundtrack to feel huge, open, at times lonely and eerie — in short, to reflect the future of the universe itself. I also wanted to convey some sense of melancholy, as this story foretells the fate of our species in a pretty somber way. I enjoy working at the intersection between orchestral and electronic music — orchestral to instill a human sound that evokes emotion, and electronic to create other worldly soundscapes and timbres that evoke awe and mystery.

JB: The line between sound design and music is blurred throughout the experience. From the onset, the counter acts as a metronome driving the first piece of music.

In many places, the deep rumbles of black holes take the place of synth bass lines, creating a symbiotic bond between the music and the visuals. I often didn’t distinguish between whether I was sound designing or composing; it all came from the same place — the need to create a mood, a sense of being present at an alien time and place. 
What were some of your challenges (or unique opportunities) in creating the sound design for this project?

JB: The sound design in the first 3 minutes was very challenging. The hectic pacing, the intensity and variety of the events, the interplay with the music all combined made it difficult to not get muddied into a sonic mess. It took very careful tweaking and sound selection to make it work. I recall spending a couple days just on a 10-second span of sound and music. Even now I look back and think it could use improvement in many places.

What are you most proud of in terms of sound on Timelapse Of The Future: A Journey to the End of Time?

JB: There are a lot of fun sonic moments. I am fond of when the stars start to die off, and the CS-80 synths soar high above the distant booms of dying suns. The black hole merger sequence is another fun moment, flowing from orchestral, to eerie soundscape, to trip-hop in the span of a minute. I am also pretty happy with the waltz that plays as the first black holes start evaporating. I considered licensing a Strauss piece to do the job, but decided to do it myself and had a blast making it. Overall this was my ideal project filled with unique sonic and musical challenges, providing opportunities to flex both my composition and sound design muscles.

A big thanks to John Boswell for the story behind the sound for his incredible video! Find out more about his work here, and support him on Patreon here