Once in a while, a game-changer comes along – and in the world of sound effects, Soundly looks to be exactly that. It’s an entirely new way of getting sound effects: It’s cloud-based, offers drag-and-drop straight to your DAW, instant access to thousands of sound effects, and it’s lightening-fast.

Another thing that’s really exciting: Soundly founders Peder and Christian are huge fans of A Sound Effect, so they brought me on board to be their exclusive distributor of premium independent sound effects! I’m currently working on bringing the libraries from the independent SFX community into Soundly.

So how does Soundly work? Check out the video introduction, read my interview with founder Peder Jørgensen – and download it for free below, so you can try it yourself:

Update: Soundly version 2 is out – get all the details here 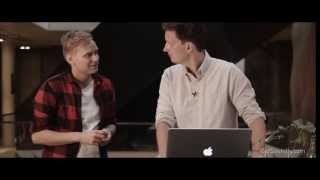 Hi Peder, just what is Soundly?

Soundly is an app for Mac and Windows that gives you access to a big 96kHz, 24-bit sound effects library in the cloud, and let’s you drag and drop sound effects from the cloud library straight into your project. It works with every sound and video editor that we have tested it with, and we’ve tested it with a lot. You can also add effects like pitching, reversing, summing, hear it in real time and have it instantly printed to the sound when you drag it out.

When did you get the idea for Soundly, and how long has it been in the works?

I started doing more and more sound design on my laptop, and it was a drag to always have to have a hard drive of sound effects with me, so I started researching if it was possible to solve this all in the cloud. I’m a decent coder and tested different ideas, and when I got the first test version running, I really felt I was onto something big. I was amazed at how fluent and fast everything was feeling and I just went from there.

I’ve been working on this on and off for the last 5 years, and we have been running beta tests for the last two years so it feels like it’s ready to meet the rest of the world.

Download Soundly for free – and get 300+ free SFX too:
Want to take Soundly for a spin? Simply download it below for Windows or Mac, set up an account and you’re off. Oh, and you get 300+ free sound effects in Soundly in the process too!

Soundly offers a unique cloud based approach to sound effects. How does it work, and how about performance?

Files come down blistering fast from the cloud in very high quality and people often won’t believe it’s possible to do it that fast, but we have done some very smart things to make this work as fast as it does. The servers are running on Google’s own infrastructure so this is very fast wherever you are, and scales perfectly when we are doing stress loads – so I’m very confident the servers will hold up even under heavy load.

Soundly comes with librarian features too, so you can manage your existing catalog too – how does the librarian aspect work?

Yes, you can also use Soundly to index your local sound effects or music and use it as a regular librarian tool.

It supports meta data in many different formats and you can also import your entire library from other sound library tools.

A cool feature is that you can monitor a local folder, so if you add new sound effects to your sound effects folder they will be indexed by Soundly and instantly available.

I’m really happy to have A Sound Effect on board for the Soundly app – and the independent SFX libraries are gradually being added. The A Sound Effect website will continue to work just as before, of course, and I have lots of exciting things coming up here, too. I look forward to sharing them with you!


There’s also a premium SFX library included. What’s the story behind that one?

The idea behind the app was to join a librarian app and sound effects in one tool. So from the very beginning I’ve been trying to get a good sound library on board. It’s been a lot of work as most people with a good library won’t sell it as a subscription. They want to sell the whole thing for a high sum instead of what we are doing, selling a subscription at $14.99 a month. I knew Christian Schaanning from the sound design community and he has done some great films here in Norway and has also been doing some work in LA on films like Transformers 3. You can check out his imdb here.
I had just lost another Library and met him randomly and drunkenly late at a bar in Oslo… Mid week. I had been to an award show – I do sound for tv and radio adds – and he had had a seminar with some junior sound designers. We made one of those drunken deals where we where going to meet tomorrow and discuss this further, and we actually did.

As it turned out, he has made one of the best sounding sound libraries I’ve ever heard

As it turned out, he has made one of the best sounding sound libraries I’ve ever heard. It wasn’t organized yet, but he promised to get it named and tagged, and he did. We uploaded the library to the beta testers in March, and they instantly loved it. As the library is in the cloud we are constantly adding new sound effects and it’s growing every day. Christian has now joined the company and we are trying our best to save the world, together. What’s ahead for Soundly?

We have a lot of stuff coming out the door, and upgrading will always be free as this is subscription based. We like to keep things secret before we release new features, but I can say that we are working on a revolutionary way for sound designers and video editors to work together in the cloud. Get on board now and join the revolution :)

Soundly – at a glance:

• FREE TO DOWNLOAD and comes with 300+ free sound effects, hand-picked from the exclusive Soundly PRO premium SFX catalog
• 2 PREMIUM SUBSCRIPTION OPTIONS: PRO ($14.99/m, 5000+ SFX), 24HR pass ($9.99)
• ACCESS sound effects in the cloud from anywhere in the world
• DRAG-AND-DROP whole sound files – or snippets – from the Soundly cloud straight into your DAW, video editing suite or to your desktop
• TWEAK AND EDIT pitch, speed and reverse on any sound, and hear the results in real-time
• IMPORT LOCAL FILES – including metadata -, to easily manage your existing SFX collections
• INSTANT SEARCH to quickly find the sounds you need, across cloud libraries + local files
• THE STORE allows you to get additional free and premium sound effects libraries – immediately delivered as you need them
• BUILT FOR SPEED, as Soundly uses Google’s infrastructure for unparalleled redundancy, safety and speed