Water Flow took six months to create, and offers 90 BWAV files recorded in different locations. A huge part of this library is based on the recording sessions by (and in) rivers. Most recordings were done during the winter just before sunrise, to reduce the amount of unwanted sounds.

Almost all recordings are completely clear and free from any birds in the background.

The first location was river called Łyna, and there I’ve recorded a sound of water flowing at different speeds, along with the sound of a dam reducing the speed and height of the river’s flow. The second interesting part of this location was the amount of fallen trees in the water, causing the water to split. Because of this, there was a lot of sonically interesting places to record.

The second river is called Guber, and it’s much smaller than Łyna. I’ve picked this place because of the really subtle water streams, and something even more amazing, natural dams built by beavers. The amount of work these animals put to built those dams is incredible.

In addition to recorded rivers, this library also includes the sound of water dripping inside underground sewers. During one of my field recording trips I discovered a hatch. I could not resist to go inside, and what I discovered there was far beyond my expectations. I made a two small trips there to record it from different distances, with different microphones in mono and stereo. 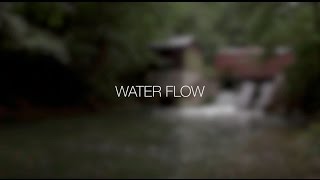