MAFX019 Volcano is a collection of unique sounds recorded in Ethiopia’s Afar region at Erta Ale volcano. Erta Ale is one of only a handful of volcanoes with lava lakes in the world, situated in the Danakil Depression, one of the hottest and most inhospitable places in the world. The name means Smoking Mountain in the local Afarigna language and Erta Ale does not disappoint in this regard, as you can see in the video. This place is also known as the Gateway to Hell, an appropriate moniker given the 47C/117F temperatures and lots of dead fauna we encountered. 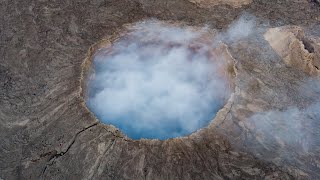 There were only a few lava pits when the library was recorded but plenty of continuous and violent toxic gas releases. Occasionally the ground would move creating low frequency rumbles and debris falling. I had to use a long boompole in order to suspend my trusty MKH8060 over the edge and I improvised a spaced omni array by taping the MikroUsi mics to a video tripod ballhead. The expedition wasn’t 100% risk-free but it was more than worth it for these beautiful sounds.