The library contains huge tails in different environments, shooting at close and far distances with various occlusion, onboard firing, sonic booms, ricochets, bullet cracks, projectile tails and much more. It also has some onboard and exterior vehicle movements and maneuvers. For sounds of military operations, you can't go wrong with this collection. 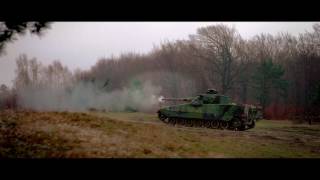