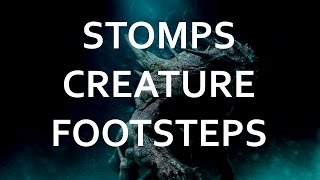 We're incredibly excited to introduce the 'STOMPS – Creature Footsteps' sound effects library – these are footsteps like you’ve never heard them before!

STOMPS is a massive collection of more than 8,500 files to boost your creativity and help you add special footstep sounds to your new project.

The library is organized into 3 categories –
Source, Textures, Design:

In the Source category you’ll find the “best of” several hours worth of our recordings sessions, with more than 7,500 files (with lots of variations) organized into 83 folders. Every single sound is the product of a new recording.

We used all kinds of weird props to record original, versatile sounds with lot of character, different textures, and in very different frequency ranges.

These sounds form the DNA of your future footsteps. You’ll have lots of different sound colours to play with, ranging from very small and harsh sounds to very low and bold ones, and all the ranges in between.

In the Texture category, you’ll find more than 600 sounds with different textures to help you customize your footsteps. These textures are also a very valuable sonic material that will help you construct lots of varying sound design work.

STOMPS now also features a special GLUED version, with the exact same content but with variation files edited together to reduce the number of single files in the collection, and making search through all sounds easier.

With “STOMPS, Creature Footsteps,” you’ll have anything you’ll need to create everything from small creature footsteps to big, out-of-this-world ones.

Stomps also comes in a Cinema Version, known as GLUED:

This version has the exact same content but variations files have been edited together reducing the number of single files in the collection and making search through all sounds easier. This version has 382 files, all with their corresponding metadata. As a plus for REAPER USERS, this version comes with Media cues embedded on the files, This means that if you import a file that has media cues to your reaper Session it is very easy cutting them using an action like “Split at media cues”.

Also the media cues can be displayed or not on the files thanks to the “Toggle show media cues in items” Action.

I hope you will find this new version useful. Enjoy! and happy sound design with Stomps!

The designed sounds are grouped into categories such as:

Gear used to create this library:

All sounds were recorded at 192 kHz, 24 Bits and edited and mastered in glorious REAPER.

All files have appropriate filenames and complete Soundminer Metadata.

All of them have been meticulously recorded, edited with patience, and mastered with love.

We put our souls into this collection and we really hope that it’s a great toolbox for sound artists looking for fresh, original, high-end sounds.

Note: No creature was damaged during the recording of this sound library.

At Bonson we create original sound effects libraries for sound designers by sound designers. We’re 100% independent with collaborators from across the globe. We cater to professionals in film, video game, television and new medias.

Thanks of visiting us!