Many of these horse sounds were recorded for major feature films including The Black Stallion, The Horse Whisperer, and Hidalgo. Splet’s work on The Black Stallion won him a Special Achievement Academy Award® for Sound Editing. This recognition was largely due to the quality and depth of the source recordings he and Kroeber created.

Using a unique custom microphone rig (one mic fastened under the belly, another placed in front of the nose), the galloping sound effects in this library achieve an extraordinary dramatic quality with the horse’s powerful footsteps captured in harmony with its breathing.

Get an array of horse footsteps at your fingertips – moving at every gait and on various surfaces from gravelly dirt to shallow water, grass, sand, cobblestone and more. The Stallion library also includes miscellaneous sounds like chewing, saddle creaks, stretching leather, and scraping carriage wheels.

Following the libraries Cinematic Winds and Industrial Sounds with Soul, Stallion is the third exclusive release by Pro Sound Effects curated from Sound Mountain: Kroeber and Splet’s venerable private recording collection created over decades of film sound work with celebrated directors like David Lynch, Carroll Ballard, and Peter Weir. Kroeber has since worked on or supplied sounds for film, TV, and games – including 6 movies that won an Academy Award® in sound, and 7 additional nominations. 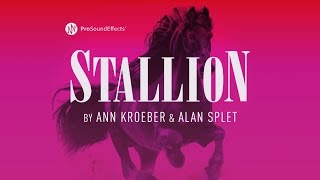 “Ann’s amazing animal recordings are truly unique. I’ve used several in my projects for both actual animals and scary monsters as well as elements in big effects design. Ann’s sounds are always extremely evocative, powerful and textured. The Black Stallion is a milestone in film sound and has been a major inspiration for generations of sound designers, and it’s one of my all-time favorites. The expressive vocals and detailed, sensitive sounds of the horse still amaze me.””

Peter Albrechtsen, MPSE
The Girl With the Dragon Tattoo, Thelma

“Ann Kroeber has a unique ability to provide one-of-a-kind sound effects. Both as a recordist, and as the knowledgeable gatekeeper of a vast, renowned library, Ann has given me great sounds that lead to great ideas.”

Winner of 7 Academy Awards® in sound