A superb collection of quiet alpine ski slopes and realistic onboard ski and snowboard recordings. The Alps pistes are known for their great snow and peaceful ambiance.
We captured the calm atmosphere and expressive whooshing and carving on these quiet ski slopes. Recordings range from high speed alpine skiers and distant voices of snowboarders, to a small class, on a variety of pistes. We also recorded onboard the ski lifts and crowds while waiting in line.
More info on how this library came together on our blog.

Contents:
The library consists of a broad range of Alpine ski slope recordings.
– Ski slope ambiences with chatty skiers and snowboarders from young to adult (solo and groups)
– Clean passby's on quiet ski slopes with a mix of speeds, perspectives and types (snowboarders and skiers)
– A very handy set of onboard recordings of skiing and snowboarding with various speeds and cadences
– Onboard ski lifts (gondola, open) and drag lifts (T-bar)
– Evolving ambiences of a moving drag lift and gondola station
– The sound of people waiting in line at the ski lifts (a mix of german/dutch/english) 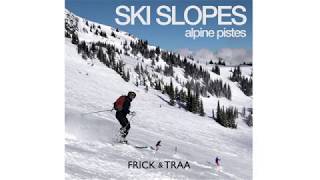 What you won't get:
– Close up 'Foley' of snow gear
– Music in the background
– Birdsong
– Apres Ski drinks :)

We are Max Frick & Arnoud Traa
Sound designers and obsessive collectors of sound.
We create sound libraries for sound professionals.
Our combined 30 years of experience, provides us
insight into what constitutes as a great sound library.