Rifles & Pistols of The World Wars

Get the sounds of 12 authentic weapons from both World War 1 and World War 2, captured by recording specialist Watson Wu. A total of 587 files are included – 107 foley sounds and 480 firing sounds.

All the weapons are authentic, the gunpowder is real and 100s of rounds were sent downrange to get you these powerful weapon sounds from the World Wars.


Behind the scenes at a weapon recording session: 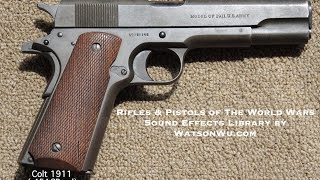