‘Quadcopter Flight’ shows off these buzzing beasts from near and far in both quiet exterior locations and the studio.

Featuring a large quadcopter and two minis, these machines were captured as they performed all possible actions, such as take-offs, flybys, revs, and sustained flight.

The library also has foley, a few crashes, and recordings from contact mics that were attached to the two smaller quads for sounds of high-tech servo/rotor sounds that can be used for sci-fi projects containing robots, sliding doors, and more. 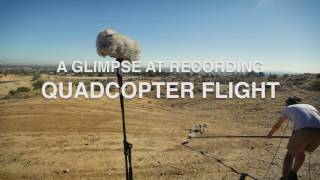 Audio Shade provides evocative sound effects that are meticulously recorded, edited, and embedded with rich metadata.
Approaching each library with the sound editor/designer in mind, we provide a wide variety of coverage, perspectives, and performances.
We also “trim the fat”  from the recordings so your time can be focused on the creative process.