Pit People is the latest game by The Behemoth, and it has all the hand-drawn animation, addictive gameplay, and absurd humor you have come to expect from the minds who brought us BattleBlock Theater, Castle Crashers, and Alien Hominid.

In this interview, you’ll hear from Ian Moreno, Production Coordinator, about how audio is a work of love and collaboration at The Behemoth, from voicing strange species with playful languages to constructing the perfect poop joke.

Written by Adriane Kuzminski – images, sounds and videos courtesy of The Behemoth and its associated artists 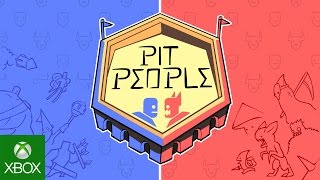 Hello! Please introduce yourself and the rest of the audio team:

Ian Moreno: Ian Moreno (Production Coordinator), William Stamper (Voice Actor), and Jay Fernandes (Lead at The Research Centaur), or what I internally refer to as “The Behemoth Audio Collective”. And by internally, I mean I say it in my head, because when I say it to someone they typically laugh. Just to be clear, we don’t have a massive internal audio team. The Behemoth in general is a many hats studio, so audio is just one aspect we all contribute to among other things.

I should also call out the programming team: Rich Karpp, Kirit Nagda and Mike Welsh who have all done tons of implementation and other audio odds and ends.

Could you tell us a little about Pit People? In January, the game came out in early access, which is the first time The Behemoth has released a game in beta. What new challenges did you face, and how does the workflow compare to BattleBlock Theater or Castle Crashers?

IM: Well, I should point out that the workflow for those prior games were all drastically different. For Castle Crashers (CC) it was mainly Stamper working with Tom (Fulp), so I can’t really accurately speak to that. They utilized a lot of the Newgrounds community as well for music.

With BattleBlock Theater (BBT), I joined the team somewhat early on. And in terms of audio it was initially in a music capacity rather than sound design. Fryda Wolff, of current VO fame, was actually contracted at the time to do audio work. Since I was already coordinating with musicians it made sense to work on all audio so I kinda segued into that. Eventually Fryda stopped freelancing and she connected us with Carsten Rojann. He took a full-time job somewhere, but at that point Will Stamper came on to do narration. Between Stamper and myself, we finished the remaining sound work.

Pit People (PP), by comparison, is a much larger game in terms of content. So in terms of workflow, the only things that differs really are a lot of the beginning stages. We had to define early on not only what things sounded like, but what defined the sound packs or profiles of a “fighter”. CC and BBT were much simpler in that there was really only one type of unit in each game and then an array of weapons. Oh and the big difference… no one spoke. Haha. PP has vampiresses, zombies, electrobots, hair trolls, humans, spidaurs and more, so we naturally wanted to give them their own sonic identities and characterize them more.

Another item to point out is that we started playing with FMOD. With PP we knew we wanted to level up in terms of audio. Early on we were playing with the idea of having music dynamically change when planning and executing all your orders. Ultimately, we found it jarring and distracting due to the speed at which you can play the game, but it’s what initially led us to using FMOD. Well, that and the desire to add more logic and make things a bit more adaptive in some areas.

Also, as previously mentioned, we have up to 3 people contributing at any given time. So there is a lot more collaboration going on with certain areas of the game, where previously it was more like cascading contributors. The game has an eclectic cast of characters, from wraiths to cupcakes, and a soundtrack that spans euro bop, spaghetti western, modern 8-bit, and other genres. How does your sound design match this level of miscellany while remaining focused?

IM: In several ways I’d say. There are multiple people working on it, so that inherently brings different flavors and approach. Stamper has created such a wonderful smattering of fighter voices. I suppose that’s categorized under VO, but there’s so much production on them that they are all uniquely designed sounds. Some don’t even have a bit of human voice at their source. In general, Stamper has a comedic background as a writer, actor, musician, sound designer, artist/animator, so all that comes into play. Jay has great comedic design sensibilities and has created some pretty vibrant and dynamic ambience throughout the game. His technical audio knowledge has helped a lot as well.

You said past games featured tracks composed by Newgrounds community members, but in BattleBlock Theater, Patric Catani’s tracks really stood out. Did he compose all the music in Pit People? What direction was he or other contributors given to complement the feel of the game?

IM: We have several artists who have songs in Pit People, including some that have been created in house. Currently, he is probably leading in the most tracks and possibly creeping past the 50% mark.

Direction was fairly straightforward with the usual materials, videos, character breakdowns, etc… However, there was one specific direction in that it was communicated that the world is a mish-mash of different times/eras, worlds and realities. So he was free to explore drastically different sounds and styles, but obviously through his lens. There are some tracks that are very specific and focused and with a singular theme. If ever there was an opportunity to get really out there and remove almost all filters… this is the time. So it’s kind of like this crazy experiment in a sense.

How would you describe the overall sound in Pit People? The sound design in your games is definitely becoming as distinct as the hand-drawn art style.

IM: Wow. Thank you! I still feel like it’s in its infancy and just starting to spread its wings. If I had to describe the overall sound in Pit People, I’d say:

As for elements, I think it can be broken down as simply: “Whatever makes us laugh.”

Do you have any favorite SFX or scenes in Pit People? I love Cupcake’s baby gibberish.

IM: That’s really tough. There are some I’m personally attached to, whether I voiced it or helped shape it, but if I have to choose one it’s definitely the shuttle sequence. [Incoming spoiler alert!]

It was kind of a culmination of a lot of different past ideas that naturally worked for the cinematic that occurs after the battle in space. Dan (Paladin) actually wanted to use “Blue Danube” in BBT, but it never worked out. We had the outline done and I believe it was Dan who had written something about you know who throwing the shuttle back to Earth like a football. I was putting together a storyboard animatic for it and got lost in that moment. There are two cinematic devices I’m a huge fan of: cutting to silence and the complete absence of sound and cutting to music that tonally contrasts the visual. It’s a common one in TV/film – an action sequence occurs to some classical piece. This was one of those moments I thought the device would work, albeit potentially dragging out the journey to Earth a bit. I put it in and I guess Stamper liked it because he kept it in the sequence when completing the audio and then of course added the cuts back to you know who talking to you know who.

But seriously, the world map wagon poops are probably the best sounds in the game and those all came from Dan Paladin’s mouth:

Just imagining their production makes me laugh out loud, haha!

When it comes to Will Stamper’s hilarious and iconic narration, how does the team choose and edit his takes so the dialogue is cheeky and awkward but still polished?

IM: Once again I can’t fully speak to the masterful sound-smithing of Stamper. He does a ton of takes and his VO drops are fairly massive. Dan and I usually listen through together and cull. I would love to put everything in, but I think it’s good in these cases to listen and objectively cherry pick. When there are narrative themes within a sound pack we try and be mindful to have a balance of everything. Also, I’ve had the great joy of learning that VO actors… well, ours at least… like to drop in little inappropriate gifts :) 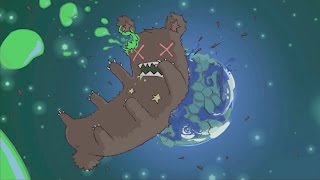 Will Stamper’s voiceover work in the opening scene

In a recent post on The Behemoth blog, you said instead of a language structure, the characters’ gibberish reflects more “who they are rather than ‘how’ they are”. Can you tell us a little more about this and some of the audio motifs that spawned from the recording sessions? Are the lines of gibberish attached to the captions or is it mostly randomized?

IM: Aw, my worst fear. Explaining that line I wrote, haha. I was definitely assigning a specific definition to “who” and “how” in that context. By who, I was referring to their sonic identity: what they say and what they sound like and what words or phrases are unique to them. With “how” I was referring to a higher level set of rules found in languages and how certain vowels and consonants are pronounced. Pretty much how accents work – that is, speaking someone else’s language through the rules of another.

The gibberish is mostly randomized, but there are a few canned lines here ‘n there. They can be found in any of the cinematics and any story-driven dramatic or comedic moments.

Do you have any fun stories from the recording sessions?

IM: We do have a few stories we’ll be sharing on our blog in the near future! Here is an overview of our Pit People VO Cast. We’ve also posted our first VO Cast spotlight recently. You can check out the spotlight on Ashly Burch.

Thanks for giving us a look into the SFX, music, and VO of Pit People and for introducing us to The Behemoth “audio collective”. As we look forward to new updates, where can people follow The Behemoth and Pit People on social media?

IM: They can find us on our Facebook pages for The Behemoth and Pit People and on The Behemoth’s Twitter.

A big thanks to Ian Moreno for sharing a behind-the-scenes look at the audio of Pit People – and to Adriane Kuzminski for the interview!