German sound designer and recordist Stephan Marche has just released Around Bridges, an interesting new sound library with some very unique soundscapes and ambiences. I’ve spoken with him about his work and his new sfx library:


How did you get started with sound effect library creation?

After 15 years working as video editor and sound engineer specializing in documentary design, I felt there was a lack of compact and easily manageable sound libraries that could quickly give me what I need, without having to browse through hundreds of files.

This need for well-arranged and not-oversized libraries drove me to launch “Detunized” in 2009.
Under this brand I develop and distribute themed sound libraries with a handy size of often less than 1 GB.
My catalog covers a growing range of sampled instruments, sound design tool boxes and field recordings.

With “Around Bridges” I reached release No. 55, and as long as I get inspired enough this list will be expanded monthly. 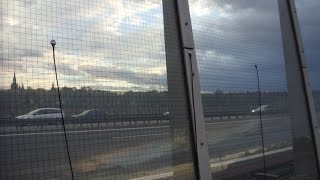 How did you come up with the idea of recording the sounds of bridges?

Dresden, my home town, is situated at the nice river Elbe and therefore has a lot of bridges. Two of them are of special interest for me: The first one was opened this year – and because of this bridge, Dresden instantly lost its UNESCO authentication as a world cultural heritage, which is really sad.

The other one, and also much more interesting from an architectural point of view, is the one called “Blaues Wunder” (eng: Blue Wonder).

I have to cross this 120-year old bridge every day and I’m still impressed by its slender construction which is held together by thousands of steel rivets.

What was your approach to Around Bridges?

So my approach was to find out if and how vibrations are transmitted by the steel components of a bridge and how these sounds are perceived when the visual context is missing or has changed.

Firstly, I discovered that even the voices of passing pedestrians are transmitted by a bridge’s handrail. As fascinating as this was, I did not include these files in the library because they are too specific and definitely insist on a concrete dialog scene of a movie, or something related to images of a speaking human. Recording on the bridge

Then I found out that this “DA-DANG” caused by cars crossing the expansion gaps could be the most versatile sound. It’s a percussive impulse that can be tweaked into many directions and therefore doesn´t need the visual context from its origin.

The same goes for these slowly swelling or sometimes even steady drones with their decent resonances (my favourite sounds of them all). It’s always nice to include a discreet background texture in a musical track, a movie score or a soundscape for theater or dance performances.

To round up this library – and knowing from experience that one often need some according ambiences in documentary editing – I also included some ambiences that are mainly recorded below the bridges. This gives them a certain character in terms of frequency range and stereo image.

What was your recording setup?

For Around Bridges I used at least 2 handmade contact mics that went into a Shure FP33. This is a rock-solid piece of gear which I’ve owned since my TV years.
I love it´s high output because this allowed me to go straight into the consumer level input of an Olympus LS-5 where I had to use just a minimum of gain.

How did people react to your project?

Well, that was one thing that struck me during the days of recording: The fact that nobody seemed care about what this guy was doing there! I mean, just imagine a person crouching down by a handrail in the middle of a bridge, staring into a pocket of dubious content, with black wires coming out that disappear anywhere between the bars of this handrail. Shouldn’t this attract some interest?

Only once a kind lady asked me if I was an employee of the town and what kind of measurements I was doing. She was seriously concerned that this bridge was in such a desolate state :-)

Thanks to Stephan Marche for taking the time to do this interview.

Check out the preview below, and grab his Around Bridges library right here.