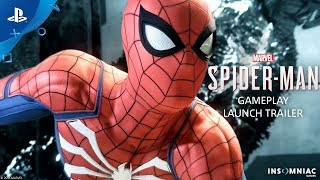 Herschell Bailey, Senior Audio Designer at Insomniac Games knows the earlier you start supporting a project with sound design the more opportunity the sound gets to help shape the overall picture. That’s why he and his sound team were involved from the very start on Marvel’s Spider-Man game for Sony Interactive Entertainment.  “Normally in the Insomniac design pipeline, designers want to test their setups to see if they have the right feeling to evoke the correct emotions and sound plays a big part of steering things in the right direction,” says Bailey.

The early collaboration has paid off. The game is racking up award nominations.  It’s currently in the running for seven awards at The Game Awards — airing December 6th — including one for ‘Best Audio Design.’

Sonically, Bailey’s goal was to make an interactive game world that sounded as massive as any Marvel film. It had to feel cinematic, enthralling, and alive. The player needed to feel like he/she was Spider-Man swinging from web to web over a busy New York street or going hand-to-hand with some tough-guy villain. Sound helps to sell that perspective.  There’s wind buffeting a player’s ears as he/she dives off a building. When a player swooshes by the cars and narrowly misses being hit, he/she hears the Doppler of the cars’ horns. It gives the player the exciting experience of being inside Spider-Man’s suit, so to speak. Bailey says, “Hearing the actual player give out a ‘WooHoo!’ always makes me smile. I am proud that we were able to pull so many emotions out of our players and to see their excitement and awe as they swing around the city.”

Behind the breath­taking sound of Marvel’s Spider-Man

Click to tweet
There was a whole world of sound the team needed to build, and they had to start somewhere. Bailey’s first objective was to nail the sound of Spider-Man’s webs. “When you ask anyone to name a superpower that Spider-Man has, the answer is always, ‘He can shoot webs.’ So that was Job #1,” he says. We went through roughly six or seven major versions of the webs, and that’s not including all the tweaks that came from each iteration.

The team wasn’t limited to existing Spider-Man web sounds. They were free to come up with a satisfying web sound that felt right for the game. And since it’s such a repetitive sound — used for traversing the city, combat, stealth, and in puzzle solving — they had to come up with a multitude of variations to prevent listener fatigue. Bailey says, “The creation of the web sound was a great combined effort of Insomniac and Sony. We all worked together to build, re-work, and then re-re-work the web sounds.  We went through roughly six or seven major versions of the webs, and that’s not including all the tweaks that came from each iteration. We finally landed on something that everyone liked.” 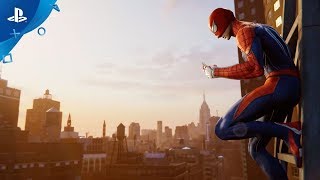 Once they had a sound for the standard web shot and swinging web, they switched gears and made other weapon-style web shots based on the standard shot.  Then they created signature versions for stealth webs, impact webs, electrical webs, web bombs, web trip mines, web wraps, web yanks and web pulls. “In total, we have well over 200 sounds that are associated web shots,” says Bailey.

There are even silky zuzzes and swishes on Spider-Man’s combat moves that are reminiscent of the web sounds. “Our goal there was ‘speed.’ The additional quick swishes of the air and cloth were to help add to the feeling of the player’s velocity while fighting and traversing,” says Bailey. Overall, combat was meant to feel fast and powerful. Spider-Man’s agility is his best weapon. He can zip around enemies and immobilize them before they can react. “On our first attempts at the combat sounds, we used our normal, bigger-than-life, heavy impacts. The result was Spider-Man sounding heavy and slow, like a tank,” says Bailey. So they lightened up Spidey’s impacts and added more wind elements and quick cloth movements to create a sense of speed. “We still have those big heavy impacts but we saved those for the finisher moves, where you really want those heavy hits.”

For the guns in the game, the direction was ‘dangerous.’ Using a mix of library and in-studio recorded sounds, Bailey and his team created different degrees of dangerous, from a base version that’s used for typical thugs to a ‘safer’ version for the police weapons. “We made a distinct version of each weapon for the different enemy factions so at any time you would be able to identify what enemy faction was firing a weapon at you,” says Bailey. Distant gunfire was created by adding real-time reverb to ‘baked’ distant gunshots. According to Bailey, the major issue in-game was that their obstruction system would block the distant gun sounds when a player would go around a building corner and that would give a false sense of where the gunshots were coming from. “We had to get our engine to recognize when the player went around large objects to ignore the obstruction for distant sounds so the player could quickly localize where a fight was occurring while traversing the city,” he says.

Another major sonic component of Marvel’s Spider-Man is the sound of New York City. Bailey knew they wanted the city to sound alive and to achieve their goal they’d need to rethink their approach to the open world audio environment.  He explains that in most of their previous releases the city was more of an ambient soundscape filled with appropriate sounds. But for Spider-Man, the city had to be a living environment. “Our mentality changed from ‘a city is an ambient backdrop’ to ‘a city is a living, emotional, interactive character.’ To help the player feel that living, emotional interactivity audibly, we made the actions a player takes have a direct result on our city,” says Bailey. For instance, the city gets angry if traffic is blocked. There’s honking and yelling.  If Spider-Man cuts off pedestrians, you hear, “Watch it!” or “Frickin’ superheroes!”  If Spider-Man stops a crime and people are happy, you hear positive shouts like, “Wow, it’s really him!”

Bailey adds, “Our city can be awestruck by the player swinging by, it gets scared when enemies are present, it gets worried when the chips are down, and it can even get sick.”

They also make sonic distinctions for daytime, dusk, and night, and for different sections of the city. Bailey says, “On top of all that, we have a radio show that is obsessively watching every move the player makes and will occasionally comment on those actions.”

At the apex moment of intensity, when they almost touch the ground, some players catch themselves holding their breath.

The city’s intensity is related to how close a player is to the ground.  At ground-level, there is direct involvement with the living city. A player can chase cars, interact with pedestrians and stop robberies. If the city becomes overwhelming, a player can escape the cacophony by traveling upward to where the excitement of the city falls away and it’s relatively calm. Bailey explains, “This helped add a lot of emotional backing to the swinging. In a normal swing, as the player gets closer to the ground, they hear the din of the city, the heavy rush of wind with cars and people reacting to them as they zip by. At the apex moment of intensity, when they almost touch the ground, some players catch themselves holding their breath. Then they swing back up to release the web, floating weightless in a split second of tranquility, take in a deep breath, and dive right back into the action.” While we won’t go into detail on the score, it’s important to point out how well the city sounds — like blaring sirens and traffic noise— fit with the music. Overall, the soundtrack feels cohesive and well-crafted. “This was a giant undertaking from the music team, environment team and a lot of mix. Most of the music implementation was handled by the Sony music team, where they made thousands of edits to the music tracks and scripted in everything to properly react to the story, player actions, and city,” says Bailey.  “Our environment team made sure to keep the city present and not overpower the music. The whole thing got buttoned up at the mix level.”

According to Bailey, the challenge here was having a music system and a city system that were both reactively dynamic to the player’s actions. Bringing the two together required “many, many, passes over the same areas while traveling at different speeds and heights, since both of those drastically changed the way the overall mix sounded,” he says.

Bailey’s biggest technical challenge on Marvel’s Spider-Man was trying to get the best quality and quantity of sounds they created to fit into the boundaries of their tools and the console. “The team had so many amazing ideas, and wonderful sounds but all that quality comes at a heavy resource price.”

I’m very proud that we were able to make a game that … is just about spot on to the goals that we set for ourselves over 3 years ago.

In the end though, those challenges were no match for Bailey and his super sound team.  “I’m very proud that we were able to make a game that sounds balanced and is just about spot on to the goals that we set for ourselves over 3 years ago,” he concludes.

A big thanks to Herschell Bailey for giving us a look at the breathtaking sound of Marvel’s Spider-Man – and to Jennifer Walden for the feature!