What goes into creating a magic sound effects library? Articulated Sounds' Magic Elements Vol. 1 library has been a very popular release, and with the arrival of Magic Elements Vol. 2 - the second and final installment in the series -, we were curious to hear what it takes to create the sound of magic.

Here's Magic Elements sound artist Vincent Fliniaux with the story behind the making of a magic SFX library - including audio examples, tips, tricks and tools + a video demonstrating the complete making of one of the sounds in the library:


Hi Vincent, please introduce yourselves and Magic Elements Vol. 2 – what’s your background, and how did you get into indie SFX?
VF: Hi my name is Vincent Fliniaux and I’ve been working with Stephane [Fufa Dufour] for around 3 years — and my journey to indie SFX was a long, extensive and chaotic road, full of amazing and decisive encounters like the one with Stephane from Articulated Sounds. After my graduation at university and conservatory in France I decided it was time to step back and discover another culture so I flew to Montreal to study digital music and orchestration. What was supposed to be a one year experience ending being my new home while I was discovering the magic of creative field recordings and game audio. I’m now a happy freelance sound designer living in a charming Montreal neighborhood with my lovely Canadian girlfriend.

This idea came to me because in game audio, we were constantly in need of magic or supernatural sounds, but they weren’t a lot of options regarding sound effect libraries. Also I couldn’t find the sounds I was hearing in all the classic movies out there that are now part of our collective conscience.

I presented my idea to Stephane and together, we decided that there were too many elements for one library, so we divided it into 2 volumes. The first one is about air, earth, ice, fire, black magic, generic magic, and the second one about energy (or electricity), liquid, foliage, white magic, cartoon (or anime) and generic magic again.

I think with the complete series this is the most exhaustive elemental magic collection out there. 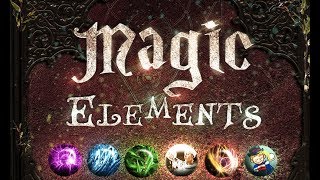 The trailer for Magic Elements Vol. 2

In general, what are some of the characteristics of the magic sounds you’ve created for this library?
VF: In my work I often find it difficult to use overly designed sound effects, especially magic ones, so I wanted something more usable and modular where there is no ton of layers all mixed in, but rather really good, isolated sources, building blocks and gently designed sounds. When I’m working on sound effects libraries I really ask myself what sounds I would like to have as a sound designer and I try to create sounds more rare or not easy to find in the sound libraries community.

Anything in particular which inspired you sonically for the library? And what sort of research did you do for the project?
VF: I don’t know about influences but I’m constantly actively listening for any magic sounds in film, series and video games because it’s often a great opportunity for the sound designers to inject creativity into their art.

I find magic sounds fascinating because of their paradoxical nature: Although no one ever experiences magic sounds in real life, we all find them more convincing if they are rooted in reality. So it’s a subtle balance between acoustic sources and transformed or synthesis elements. Some tools are really appropriate for that (spoiler: granular).

I find magic sounds fascinating because of their paradoxical nature: Although no one ever experiences magic sounds in real life, we all find them more convincing if they are rooted in reality

About researching, as I was saying before, I tried listening to what already existed in the market to avoid doing the same things and propose new ideas.

I also re-watched a lot of Miyazaki movies with my girlfriend and the elemental magic-based anime Avatar: The Last Airbender. It was an efficient combination of work and relaxation.

Fruits of the labour:
Here are the two libraries in the Magic Elements series:
Discover more sound effects from Articulated Sounds here

What was your recording setup for this one?
VF: Stephane and I have really different setups but his is always better than mine – even if he’s traveling the world with only a backpack! I mainly used my SONY D100 and a non-orthodox setup of two DPA 4060 with an old Sound Devices MixPre mixer for the gorgeous analog limiter.

I also did some recordings with an Aquarian H1A hydrophone mic that my good friend Michel Marchant from BONSON lent me. 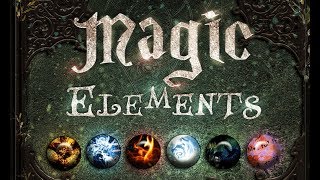 The trailer for Magic Elements Vol.1

What were some of the synths and plugins you used for the library – and did you know from the get-go what tools you’d need to get the sound you were after?
VF: At the beginning, especially for the volume 1, I had no idea which plugins I was gonna use because it was a lot of experimenting. With time, however, I started to use a few plugins more often and I even created mine in Reaktor and Bidule (a graphic modular environment like Max/MSP from Plogue, an awesome Montreal company).
The plugin I used the most was Whoosh from Tonsturm, it’s an amazing tool to create movement or sculpt envelopes in sound and there is an easy “hack” to be able to use it as an FX instead of an instrument, so you can process you sound in realtime.

Here is a picture with the instructions for the small hack: I also used The Mangle from Sound Guru, which has, in my view, the most appealing visual interface for a granular instrument out there.

During the process of creating the sounds for volume 2, I also took a couple of days to develop my own realtime granular FX in Reaktor

The list can be very long so I’m going to drop a few names to check out if you want to experiment with magic sounds: Crystallizer from Soundtoys, SpaceGrain from GRM, Chromaphone 2 from AAS (another awesome Montreal company), Paul Stretch (thanks Xenakios for the VST implementation) and of course the (not anymore) secret weapon of all sound designer: S-Layer from Twisted Tools.

During the process of creating the sounds for volume 2, I also took a couple of days to develop my own realtime granular FX in Reaktor because I always felt frustrated with the existing ones (too much latency, too sci-fi sounding, not enough quantized pitch manipulation, too music-production oriented). It’s not perfect but I’m really proud of it because it was my first effect. It’s now my go to granular processing FX.

If you want to try it out, get the download link here

Can you describe the process behind the making of one of the sounds from the library, from your initial idea to the final sound?
VF: To answer that question I did a small video with my splendid French accent, showing the complete process of creating a particular sound of the library: 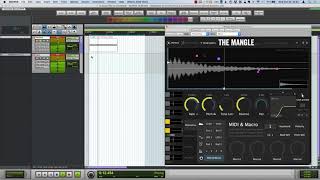 What were some of the hardest sounds to get right? And overall, what was the biggest challenge with the library?
VF: There was one sound I really wanted to design, and it took me about one month of stubbornness to finally get it: It’s the classic electric zap sound effect that we can hear basically everywhere. For some reason, it almost seems like the rarest sound effect, at least in my personal library. The only one I have is from Sound Ideas and who knows who – and how – they did it…

When spring arrives, we tear off the film – and as I was violently tearing it off, I heard a sound really close to electricity

Everything began with a happy accident: Maybe you know how cold it gets here in Montreal during the winter – and I live in a very old apartment -, so each year, at the end of fall, we put an insulating plastic film on every window to keep the heat in. When spring arrives, we tear off the film – and as I was violently tearing it off, I heard a sound really close to electricity.

It became the main source for the electric zap sound.

After that it was a long process of trial and errors.

I remember designing a kind of saberlight lockup initial attack and one day, playing with transposition, reverse, layers and processing, without quite knowing why, I finally got it!
I was so happy that day – pop the champagne!

Here is the final sound:

Overall I would say that the biggest challenge was to find a good balance and to keep consistency between all the magic elements. Even if one kind of sound was easier to design, I had to force myself to work on the missing sounds for the library. I also renamed almost all the sounds at one point to have a better consistency across the whole library, something I find I could have done better for the volume 1.

The library had a strong impact on my personal life: For example, we could not hike anywhere without me recording EVERY rotten tree we came across

Any particularly fun moments or experiences making the library?
VF: I don’t have any particular moment in mind, but I can tell you that the library had a strong impact on my personal life: For example, we could not hike anywhere without me recording EVERY rotten tree we came across.

Any favorite sounds in the library?
VF: I would say the electric zap sounds because of all the tears (!) I put in them – and maybe also the fairy dust sounds. I like them because they are very pleasant to listen to, useful and really versatile (in the way that I designed them you get short appear-sounds, but also medium and long constant-fairy presence). I’m also happy with the spectre or wizard flying sounds because I think it’s the kind of sound you don’t have a lot in your personal library (credit to my girlfriend for giving me that idea).

Any essential design advice for customers on how to make the most of your sounds?
VF: I would say try to combine a few types of magic together to build more complex sounds; white magic sounds, for example, is a good match with other elements or any other sounds you want to use in a magical context.
Also, even if we use the word “magic” in the title of the library, a lot of sounds are really useful in other situations like supernatural scenes or “over the top” moments.

A big thanks to Vincent Fliniaux and Articulated Sounds for the story behind their magic sounds. Be sure to check out the full library below:

One thought on “The secrets to creating a magic sound effects library – with Vincent Fliniaux:”