Just came across this great, in-depth panel talk on immersive audio for VR, from VR LA:

This panel features a selection of some of the most experienced sound designers and mixers in 360 video productions today. During our session, learn answers to questions such as:

• How should I approach audio for VR and when does it take place during the production timeline?

• How do I lobby effectively for audio in a typical production?

• What are the best audio production workflows for VR today? What works? What doesn’t work, and why?

• What features are needed in today’s audio production tools for VR?

• Are we ready for some content basic workflow and distribution standardization? 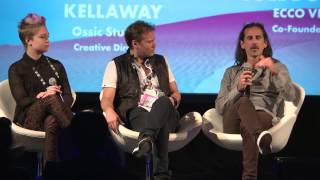 (Thanks to HDSurround for finding this)

Featured in the video:

Martin Walsh received a PhD in spatial audio from Trinity College Dublin in 1996. From there he joined Crystal River Engineering (later Aureal Semiconductor), where he co-developed one of the first industry standard positional 3D audio APIs for VR and gaming. In 2008 Dr. Walsh joined DTS where he now holds the position of VP, R&D for spatial audio post processing research. His duties include leading development of all spatial audio associated with the DTS Headphone:X program, with a particular focus on 3D audio for virtual and augmented reality.

ECCO VR co-founder Joel Douek is an award winning composer and sound designer whose work has brought many top Virtual Reality experiences to life, as well as numerous BAFTA and EMMY-winning productions. Born in London, England, Joel draws heavily on his background in music and neuroscience to guide & innovate the use of sound to bring meaning, realism and emotion to the world of VR. He regularly speaks on panels & workshops such as AES-AVAR, VRLA & others, sharing the ideas and workflows Ecco VR have developed to create best-in-class spatial sound for VR & AR. Joel has also scored over 80 documentaries including the last nine by British naturalist Sir David Attenborough, along with hundreds of TV episodes, blockbuster Animés, feature films, commercials and sonic brands such as IMAX and HULU Originals.

Tim Gedemer is President and CEO of Source Sound, Inc., a premier audio design and mixing group based in Los Angeles. He is a 28 year, award-winning veteran of the Hollywood feature film audio post production community. Under his direction, Source Sound has become the premier audio finishing provider to Warner Brothers, Universal and Fox Feature Film Marketing groups. Partnering with game audio legend Charles Deenen in 2012, “Source Sound Digital” was formed and has since created the sound design and mixed for franchises like Star Wars Battlefront, Call of Duty, Halo, The Crew Need For Speed and Gears of War, among others. In 2014 he began working with Jaunt on their groundbreaking cinematic virtual reality projects, including the Paul McCartney and Jack White concert experiences and many other pioneering VR experiences including virtual reality audio experiences for cinematic, game based and live broadcast virtual reality projects.

Sally-anne Kellaway is the Creative Director at Ossic, and is the biggest technical audio nerd you’ll ever meet. This brings together some of Sal’s favorite things – daydreaming, evangelizing cool things, organizing things and Audio Design for VR. Sal is still riding the VR hype train because she believes VR is the future of entertainment, or the world in general. Sal is enabling this future by founding the Virtual Reality Content Creators network for Australia (VRCC_AUS) and the IGDA Special Interest Group for Virtual, Augmented and Mixed Realities.

Sally presents at conferences worldwide about the role of Audio in Virtual Reality, as well as researchconducted from her Masters course in Audio and Acoustics and Diversity in STEAM fields. Sal has been named as one of MCV Pacific’s Most Influential Women in Games, and in the MCV Pacific, and the Develop 30 Under 30.