Looking for wing sound effects? Field recordist Thomas Beverly has just released a unique SFX library – one that captures the sound of hummingbirds. I was curious to know how he got the idea for the project, and how he managed to record the sounds of these tiny, aerial acrobats. Here’s the story behind the one-of-a-kind hummingbirds SFX library: 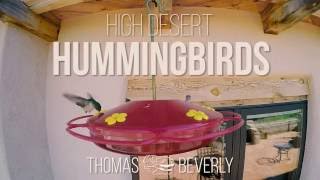 Hi Thomas, please introduce yourself and the Hummingbird SFX library:

My name is Thomas Beverly and I am an American composer and field recordist based in Philadelphia.
This library was recorded as part of an extended recording trip in the high desert of west Texas. I used my parents’ house near Marfa, TX as home base and then traveled throughout the region recording hummingbirds, winds, trains, and summer thunderstorms. I have been fascinated by the sounds of these birds for years, and finally had chance to record them in the field. Many species of hummingbirds were captured in close proximity and stunning detail while they visited the feeders at our remote adobe house.

Where did you find the hummingbirds to record – and how much planning did you do in advance?

At my parents’ house in the Davis Mountains in west Texas, near Marfa, Texas at an altitude of about 6,000 ft. I knew the birds would be most active during the summer, so I brought my Sennheiser MKH 50/30 MS rig to do close up recording.

What was your recording setup and approach?

I began recording with my Rycote MS Blimp (with windjammer) about 2 feet away and 2 feet below the feeder. As the birds became accustomed to the blimp after a few days, I gradually moved it closer and closer.

What are some of your favorite sounds in the library?

Definitely the variety of fundamental “hum” frequencies of the hummingbirds’ fast-moving wings, which I believe is determined by the wing flap rate of the bird and varies according to gender, species, and size of the hummingbird. I categorized these recordings into high, mid, bass, and sub-bass birds according to the fundamental frequencies of these hums. The wing flap rates of these species average around 50 flaps per second. Also, the swarming and territorial dogfights among the birds were wonderful. At times I had 6 hummingbirds simultaneously within 12 inches of the mics.

Any surprising lessons learned while making the library?

I quickly learned that hummingbirds take tiny, frequent bathroom breaks while flying…and you must take precautions. Also, hummingbirds don’t like the fuzziness of the windjammer and will chase you when you are refilling the feeder. They’ll also do astounding dive-bombs toward another bird challenging their territory. I watched them fly straight up a few hundred feet, flip over, and dive-bomb at top speed directly at another bird they were trying to chase away.

Any tips for other recordists when it comes to capturing bird sounds?

From my experience, you need the patience to spend a ton of time sitting near the feeder while avoiding sudden movements.

Gradually, the birds will stop fearing or avoiding you. They even started flying within two feet of my face and gawking at me. Remote locations where birds don’t have a learned fear of humans can be extremely helpful as well.

You’ve recently started out in indie SFX – any tips or insights for others who are looking to take the plunge?

Get a cheap portable recorder and just start recording! Previously, I did a bit of field recording (with borrowed equipment) that I used in my own music compositions. However, the big change was when I bought a Zoom H6, made a few homemade contact mics, and went on a cross-country bicycle trip from San Diego to El Paso during the summer of 2015, recording all sorts of sounds along the way.
The most valuable lesson I’ve learned was during this first extended field recording trip: I learned to clear my mind, slow down, and be totally present in a location. Once I could sit happily and completely still for 30-45 minutes and just listen…I decided I was ready to take the plunge, invest in some professional recording equipment, and go exploring for new sounds.

What’s next for you in terms of sound effects libraries?

I have always been a bit of a storm chaser. I was lucky to be in west Texas during some blustery thunderstorms this past summer. I was able to capture a large number of lightning strikes at distances ranging from 2,000 feet to 20 miles. At distances under 3 miles the sound takes anywhere from 1-15 seconds to reach the microphones. I used that time to adjust the gain appropriately so the thunder didn’t overload the mics (you just have to plug your ears and duck for cover if there are strikes within 1,000 feet). It was thrilling to learn how to ride the gain based on the brightness of the lightning strike to get the best recording. I am planning to release a 2-part thunder library. “High Desert Thunder” will include a wet and dry version. “Wet” will contain rainstorm thunder and “Dry” will included clips of clean resonant thunder. “Wet” and “Dry” will be available to purchase separately or together as a bundle.

A big thanks to Thomas Beverly for the story behind his hummingbird SFX library!
Get the full library below: