Halloween is just around the corner, so we’ve dimmed the lights and compiled this Ultimate Guide to Halloween Sound Effects for you.

First off, we take a look at 13 horror sound libraries that will terrify your listeners, share the inside-story behind the sound for a number of scary horror movies, and guides to ways you can create your own nightmare-inducing sounds.

We’ve also hand-picked some tips for creating spooky sound effects + found some interesting behind-the-scenes videos on horror/gore sound design (and what makes for a scary sound in the first place):

13 Horror Sound Libraries That Will Get Under Your Skin:

It’s time to celebrate some of the horrific sound libraries that the community has released. We have zombies, beasts, gore, suspenseful ambiences, cinematic effects, and much more – so if you’re looking to send some chills down your listeners’ spines, you’ll definitely find what you’re looking for here:

Cinematic Darkness Bundle
First, we bring you the intense effects from BOOM Library's 'Cinematic Darkness Bundle'. In this collection, you'll hear hundreds of bone-chilling blockbuster quality sounds from synthetic screams and insane stutters to sinister noise and creepy drones. It was co-produced with sound designer Sebastian Johnson of World War Z and Resident Evil 5 fame, so you can be sure you're getting top-of-the-line unsettling sounds!

Six Monsters
If you're looking for something more organic and beastly, then 'Six Monsters' by Lukáš Tvrdoň may have what you're looking for. In this library you'll hear the growls, screams, and deaths of folkloric monsters like behemoths, ghouls, and goblins, as well as the 'TwinHead', 'Black Boss', and 'DeadBaby'. What is creepier than that? Each imagined beast also has several expressions that will raise the hair of anyone listening.

STOMPS – Creature Footsteps
Perhaps you have the beast vocalizations you need, but you want your monstrosities to sneak up on your audience or even pummel them. 'STOMPS – Creature Footsteps' by Bonson has over 8,500 sounds of footsteps for hellish monsters like Kaiju, giant crabs, T-Rex, Kronos, hellions, pirate zombies, and even androids, rock giants, sociopathic mechs, and an evil Santa. You'll hear these beasts walking, running, galloping, and trotting their way to their prey - your audience!

Infected Zone
For a horror collection, your library wouldn't be complete without a little undead gore. 'Infected Zone' by MatiasMacSD has over 200 sounds of zombies biting, breaking bones, eating flesh, digesting said flesh, dripping blood, and traveling in hordes. It also features sounds of self-defense with stabs, gunshots, and machine guns, as well as suspenseful ambiences, drones, musical elements, and cinematic impacts. If your project features those 'zed', this library has the horrific deaths and troubling atmospheres you need.

Just Transitions – Creepy Trailers
To get your audience primed for nail-biting scenes and jump-out-of-your-chair scares, you'll need to set the mood with an intense trailer. 'Just Transitions – Creepy Trailers' by SoundBits has 270 frightening whooshes, haunting noises, unexpected stingers, and complex motions that sound like they're coming for you. Each of these intricately designed sounds will add a terrifying edge to your trailer and give your game a petrifying atmosphere.

Atmosfear
Coming from the imaginations of Glitchedtones, 'Atmosfear' has ambiences that capture the emotions of being in a dire situation. From industrial torture chambers to abandoned asylums, these detailed, droning backgrounds will find their way right into your audience's psyche, convincing them they will never escape. With edgy synthesis and traces of creepy tones, these sounds have a sense of dread that is essential for your foreboding rooms.

Scream Collection
Sometimes all you need is a good, clean scream and 'Scream Collection' by Bottle Rocket FX has just that! This library gets you over 440 screams, gasps, grunts, evil laughs, and more that will awaken a feeling of powerlessness and terrified empathy in your horror soundscapes. Featuring several actors both male and female, you'll get all the variations you need to create a tortured character or an iconic soundscape.

The Undead
This library presents the type of living dead that can pull the heart out of Simon Pegg's 'zombie values' with one swipe. The zombies in 'The Undead' by ShotgunMike have flesh that has rotted down to the bones so that their vocal folds are hanging by a string and their breath alone could kill you. You'll hear over 100 of their growls, bites, attacks, taunts and more, for a collection of vocalizations that is not only detailed and chilling but also paints a clear picture of what these monsters look like!

Gore Toolkit HD
For the more sadistic designers out there, 'Gore Toolkit HD' by Soundopolis has the disgusting, twitch-inducing sounds of slasher horror films. You can almost see the glimmer of light shine across the knife before it plunges into flesh, striping the walls with blood. The library is divided into 'fresh gore' and 'classic gore', so you'll get sawing, tearing, chopping, and goops, as well as B-movie-inspired smacks, splats, squirts, and oozes to give your project some cruel flair.

Asylum
On the other side of classic horror movie sounds come those inspired by the frenzied, literary horror films of the '70s. With over 500 sounds, 'Asylum' by Epic Stock Media gets you the intense sound effects that liken themselves to The Exorcist and The Shining with intense rises from all textures. It has cymbal screeches, piano hits, reversed voices, whispers, whooshes, and moments that will make you grit your teeth - so if you're in the depths of designing a horror scene, this collection will be your cherry on top!

Doom Drones
SoundMorph brings you a treat from the horrific tales from Lynchian affairs. In 'Doom Drones', you'll hear textures that fill the frequency spectrum with creeping organic sounds, dark swirling tones, abstract textures, and echoing booms that seem to suggest a vicinity that encapsulates you yet has no boundaries. Each of the 120 sounds is loopable, so these sounds are not only easy to implement, they might slowly drive your audience mad!

Bowed Cymbals
Other than a blood-curdling scream or a clean splatter, there is no sound more distinct to horror than the strange harmonics of bowed cymbal - which it doesn't hurt to have a whole library of them. Tonal Gurus brings you 49 versions of these iconic sounds in their library, 'Bowed Cymbals'. Using cymbals and bows of all shapes and sizes - including rides, hi-hats, chinas, crashes and more - this library has a performance to fit your horror story's every beat and horrifying discovery.

Dehumaniser 2
Finally, for our horror roundup, we have the most versatile do-it-yourself monster vocalization plugin around. As part of the workflow for popular games known for their beasts, like Evolve, Killer Instinct, Doom, and Audio Defence: Zombie Arena, as well as films and TV shows like The Conjuring 2 and Sleepy Hollow, 'Dehumaniser 2' by Krotos Audio is the ultimate monster creation tool. It now has hundreds of presets, middleware compatibility for live performances, and many other handy features, so nothing can get in the way of your monstrous creation!

Want even more horror sounds? Check these out:
View all the Horror libraries here

Behind the horror movie sound:

We’ve shared the story behind the sound for quite a few horror movies here on A Sound Effect – you can read them below:

• Creating the dark, evil sounds of ‘Annabelle: Creation’ – with Bill R. Dean
• Creating the sound of fear for ‘It Comes at Night’ – with Damian Volpe and Robert Fernandez
• Behind the horrifying sound of ‘Alien: Covenant’ – with Oliver Tarney and Michael Fentum
• Behind the scary sounds of ‘Blair Witch’ – with Andy Hay
• How the creepy sound of ‘Lights Out’ was made – with Bill R. Dean
• Young UK filmmaker creates award-winning horror sound: Here it is – and here’s how he did it
• Creating the horrific sounds of ‘The Conjuring 2’ – with Joe Dzuban

If you want to learn how to create your own horror SFX, here are several reads to get you started. We’ve also hand-picked a bunch of sound design of tips further down in this guide.

• How to create horror sound effects that are truly scary (and gory!) – by Saro Sahihi
• The Guide To Sound Effects (features lots of tips for gore and horror) – compiled by David Filskov
• Creature Sound Design Insights from David Farmer, sound designer on The Hobbit & LOTR
• Sound for Scarehouses – A Q&A with Marc Straight

How to create your own horror sounds:

If you want to have a go at creating your horror sounds, here are some DIY ideas from sound designer David Filskov’s excellent Guide to Sound Effects:

I used an umbrella opening and closing rapidly for the sound of bats flying one time… turned out great. I think I had to filter out some of the low frequency material, though.
-Tim Clarke

A pair of leather gloves flapped about is a good substitute for wings flapping when a bat takes off.
– Garry Taylor

Blood and guts being torn out

I know how to make a nice sound of blood and guts being torn out. Just make a milk pulp, put it into your mouth, and then try to say “Ghhhh”. Mix it with the end section of any water splash sample or add a sample where you’re moving out your hand from a bucket of water.
– Adam

Fruits! Especially tomatoes (for splatters) and potatoes (for wet crunchy sounds). Another classic is making a goo with eggs and dip rags and paper towels into them and play.
– Gustaf Grefberg

Slide off the top of a toilet tank.
– Ben Burtt

Get a few day’s worth of stubble on your face. Go somewhere real quiet and record running your hand and arm under your chin – it mixes in nice with the hairs on your arm. Or as I just found out, get a mouse mat with a rubberized or cloth surface and rub that under your chin :-) To further this idea maybe put some shaving gel on and take a credit card and lightly rub it across? That way you get bristly with a bit of slime.
– Dave Sullivan

Having just eaten a bowl of macaroni and cheese shells, I have to say it’s the most convincing tentacle sound I’ve ever heard. It also made the bowl harder to finish :-)
– Jay Semerad

Slide a straw up or down in a McDonald’s large drink plastic lid. Try pitching it down and stretching it – and voilá! McZilla.
– Max Hodges

Bonus videos:
The (surprisingly filling) approach to horror sound design for ‘The Evil Within’: 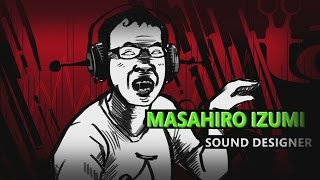 The Sound of Alien: Isolation: 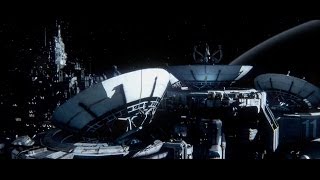 Why do things sound scary? 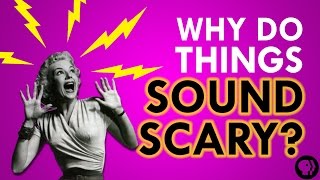