I spent my summer exploring the lush soundscapes of northern Montana in Glacier National Park. This was my first time recording in the Rocky Mountains and I was excited to test my field recording skills in the expansive coniferous forests and glacial valleys.

A Conservation Approach to Field Recording

I approach field recording as an act of conservation, so I wanted to capture the sounds of this stunning natural cathedral while these glaciers still remain. Of the 150 glaciers reported in 1850, only 25 remain in Glacier National Park and they could all could melt within 30 years (Wines, 2014). Given this urgency, I wanted to capture the soundscape of these stunning valleys. This ecosystem will never sound the same when the glaciers disappear. To be clear, I did not record any glacial ice or snow on this trip. The goal of this trip was to capture sounds of the flora and fauna in the glaciers’ surrounding ecosystems. A warming environment causes glaciers to melt, native species to migrate, and vegetation to die out or move to higher elevations. As the flora and fauna react to the temperature changes, the soundscape will undoubtedly change as well. It is my hope these libraries will serve as a small snapshot of this beautiful environment and preserve its unique soundscape for years to come.

One of my first goals upon arriving in Glacier National Park was to find Common Loons (Gavia immer) to record. The first time I heard one of their magical calls, it was as a distant echo across a large glacial lake. For a moment, I thought was hearing a wolf! When I realized the sound came from a loon, I was astounded that a bird that’s only the size of a large duck can make such a haunting and resonant call. Loons can be found in pairs on small boreal lakes of North America. I learned they are active around dawn like most other birds, but will also call sporadically throughout the night. In order to get a clear loon recording, I found their nest on the lake and sat near it as close as possible to the water. This made for ideal listening as the loons’ wails resonated across the still water. Enjoy listening to some of their wails, yodels, and tremolos below:

After a few days focused on recording loons, I was excited to explore the rest of the park. Fortunately, I found several great spots to capture lively and unique ambiences. Soon, though, I started to hear a low thrumming sound in my recordings, like the sound of a distant lawnmower. Dismissing it as an electric generator, I turned off the recorder. “No big deal.” I thought to myself, “Generators ruin recordings all the time.” I packed up my equipment and decided to find a new spot to record.

“The generator kept following me.”

I tried five different locations, but I couldn’t get away from the hum of the generator. Frustrated, I thought I might have overlooked an industrial drilling site nearby. My entire trip would be ruined because of one incessant generator!

Fruits of the labour:
Thomas Rex Beverly has created four new libraries based on his recording adventures in the Rocky Mountains – here they are:

I went to the park ranger station to inquire about the generator hum and played the recording for the ranger on duty. Without hesitation, he exclaimed, “Oh! That’s a Ruffed Grouse!”

The park ranger went on to explain that a male grouse will attract a mate by perching on top of a hollow log and beating his wings to create a bass pulse. To the male grouse, the log is a natural amplifier, but to the untrained ear, this all happens to sound like a generator revving up.

I was so used to avoiding man-made sounds in my nature recordings that I didn’t even think this sound could have been an animal! All hope was not lost. From then on, I stopped trying to avoid the Ruffed Grouse. Instead, I honed my microphones in on the bass thumps and brought their beautiful drumming into focus in my recordings. I even found a perfect spot at the end of a large glacial lake where the thumps were amplified by the water’s surface and carried across the lake like the loon calls!

For more information about the Ruffed Grouse, check out this video of Ruffed Grouse drumming from the Cornell Lab of Ornithology: 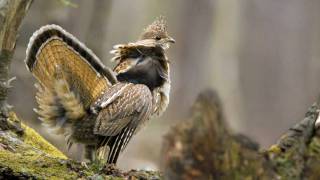 *Note – the bass thumps from the Ruffed Grouse is all below about 100 Hz, so it can easily be low cut out of the recording if you don’t want it in your project.

Airplanes are the bane of field recordists’ lives. Luckily, air traffic in northern Montana is relatively light, as Glacier National Park’s location is away from most of the major air routes in between major North American hubs. Because of this ideal location, I was able to capture extremely long dawn choruses, that magical moment when the sun begins to rise, and all kinds of birds wake, calling into the dawn air. The majority of the NR: Active Nature library is contained in four extended dawn choruses with clips ranging from 30 to 50 minutes. This is exceedingly rare to find anywhere in the continental United States. Gordon Hempton talks at length about this in his book One Square Inch of Silence. Enjoy listening to some of those lively dawn choruses in the Northern Rockies: Active Nature demo below:

On this trip, I took every single piece of recording gear I own. While I’ve done a lot of nature recording in West Texas and New Mexico, during most of those sessions I had a house as a home base and made daily excursions to record.

This trip was my first extended, car-based field recording road trip and I found that taking all my gear was nearly unmanageable. As a result of worrying about temperature, humidity, and general care of the gear, I made fewer recordings this trip. However, since this trip, my mindset has become:

As a field recordist, I want to be fully present in the environment I am recording. I find it much easier to clear my mind and meditate if I have less gear bogging me down. I have started asking myself, “Could I get a replacement overnighted if this item broke?” In most cases, the answer is “yes.” As a result, I have packed lighter for more recent recording trips. Here is a list of used and unused gear from my Northern Rockies trip:

Looking forward, I would rather take one set of microphones and find twenty magical places to record, than bringing three sets of mics to over-record a few easily accessible locations. With less gear, I can listen to the environment to find the perfect recording spot. Enjoy listening to some of the perfect spots in the Northern Rockies: Quiet Nature demo below:

On the long drive home to Philadelphia, I thought about ways to reconcile the conservationist activity of recording soundscapes with the environmental impact of traveling to recording sites. Even my fuel-efficient sedan generates carbon dioxide that contributes to climate change. I calculated that my drive from Philadelphia to Montana generated one ton of CO2. I decided to purchased carbon credits for one ton of CO2 and make the trip carbon neutral. Now I was not only preserving the soundscapes of the glacial habitats of Glacier National Park, but I could also offset the carbon footprint of the recording process and slow the melting of this unique natural habitat!

I am constantly learning from each new environment I visit. I know the deserts of the Southwest well and explored them extensively in my High Desert Series. Now I’ve gained experience in the coniferous forests and glacial valleys of the Northern Rockies. Next, I’m off to the temperate rainforests of the Pacific Northwest. I’m sure to be challenged by rain and humidity in yet another environment, the Olympic Peninsula, which receives over two hundred inches of annual rainfall in some places. As always, I’m excited to explore a new ecosystem with my microphones and capture the wonderful sounds nature has to offer.