Kai Paquin recently released a new sound effects library called Gizmo - and it's taken the sound community by storm, flying straight to the top of the charts. In this new interview, Kai Paquin gives you the story behind the library, and shares some of his favorite sounds and approaches for capturing those gizmo sounds:
Please share:

Hear a taste of what Gizmo sounds like above

Hi Kai, please introduce yourself and your new Gizmo sound effects library. What are some of the highlights of the library?
I’m Kai, a SFX editor from Los Angeles, and Gizmo is my newest release. It’s a collection of different clicks, snaps, clinks, clunks and all the other sounds you’d expect a machine to make if it ran without a motor.
There’s a lot of cool things about the library, but a highlight for me was recording an old antique cash register. I’m not the first person to do that, but hearing all the small gears and popping buttons at 1/20th speed is really impressive sounding.

What was your initial goal when you set out to create the library – and what sort of planning went into making it? How long has it been in the works?
A couple things inspired me while making this library. The first thing is a very talented recordist Robbie Elias had shared a recording with a stereo pair of Sanken CO100k microphones with me and it was otherworldly slowed down. I had never heard such a complex-sounding mechanical object and realized there’s a whole world of mechanical sounds like that, that needed to be slowed down.

Slowed-down recordings of an electrical typewriter

I work on a foley stage and had been collecting small antique mechanical props for years, like fishing reels, turnstile counters, hole punchers and a variety of other hand powered mechanical props

Second thing is I work on a foley stage and had been collecting small antique mechanical props for years, like fishing reels, turnstile counters, hole punchers and a variety of other hand powered mechanical props, so I was about half way there making a library. I was also on my way back home to visit my parents in Oregon where antiques are much cheaper than down here in Los Angeles, so I figured I could flesh out my collection of props quickly and cheaply while I was on vacation.
Finally, earlier in the year I was offered an amazing opportunity to help on another incredible mechanical library for Rock the Speakerbox called Gearbox and that put a taste in my mouth for taking my own approach at mechanical sounds.

As a side note I really strongly endorse also getting a copy of the Gearbox library on top of purchasing Gizmo because it tackles a whole different set of mechanical sounds. I tried to record my sounds to not have too much overlap with that library so they would complement each other well. Definitely check it out!

What was your recording setup for this one?
For most situations I was running 4 microphones. A stereo pair of Rode NT1a and a stereo pair of Sanken CO100k mics. The reason for recording with both is the Sankens have a lot of bandwidth from 0-100khz, but in general sounds with a lot of ultrasonic frequencies sound really thin on those microphones – since, even though you have the gain turned up on the recorder to the point you’re almost clipping, you might be listening to the part of the sound in your hearable range at something like -40db.

Running a second coincidental stereo pair that can’t record above the hearable range gave me a reference point of what the sounds should sound like at resting pitch while mastering. In some cases it gave me a different, richer flavor of sound to blend in with the Sankens in the mastering process to generally make the recordings feel richer than if I had just EQ’d.

Reactions from the sound community:
The library recently received two reviews – here they are:

“Wow, just wow. There is so much here I don’t even know where to begin. Kai’s diversity in sound sources makes this library extremely versatile. The dual Sanken 100K’s (alongside other microphones) have added pitch bending that allows you to sculpt and design with these sounds like never before. I tiny door hinge can be transformed into a castle-sized door creak; it is truly remarkable. Kai also made sure to capture plenty of unique takes so there is always an alternative performance to rely on. Lastly, Kai’s attention to concise yet thoroughly fleshed out metadata makes searching a breeze.
Source Material: 10/10
Sound Editing + Mastering: 10/10
Metadata: 10/10
Microphone Choice: 192/192”

“The highest quality clicks, clanks, gears, metal, mech, springs etc. This library has everything you would need for anything mechanical in any facet. Kai has separated the source of the sounds to just the essence of the sounds. It is truly a acoustimatic experience listening to this library. The incredible high quality 192k and 96k sample rate allows any sound to be manipulated endlessly. You can hear the endless amount of hard work put into this. This will be a library that will always be ingrained in my mind when doing projects. The metadata is remarkable in the amount of detail. I felt that I would listen to a sound, explain it in my head and the metadata was exactly what I was thinking.

Any surprises or fun experiences making of the library?
I’m a big fan of antique shopping, so going on a massive tour of antique shops was pretty dang fun. There were a couple field recording trips to remote places to get certain sounds like the bear box ronks. Some of the sounds never made it into the library like the swish/whoosh section, but I spent the better part of two days recording slingshot whistling projectiles with the Sankens. The recording session was a blast, but the recordings ended up being rejected because of too much noise.

He offered I could buy their back stock of replacement servos he had taken off old dumpster pulls. I ended up getting a pretty sizable collection of different servos.

It turns out, besides selling RC cars and planes, the clerk also built robotics for movie sets and had a workshop in the back of the store. Turns out they were going to close in a couple months and he offered I could buy their back stock of replacement servos he had taken off old dumpster pulls. I ended up getting a pretty sizable collection of different servos.

Do you have any tips to share with users on how to make the most of the library?
I definitely recommend assigning the samples to a sampler and going to town. You can make a lot of interesting sounds really quickly by performing them rather than cutting by hand. That being said though, cutting by hand gets more deliberate sounding actions, so both are worth doing. 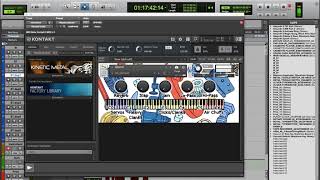 An example of the Kontakt instrument that comes included with Gizmo

Any tips or lessons learned you’d like to share with others who are looking to create sound effects libraries?
Mastering and metadata are as, or more important than the sounds. Putting extra work into making sounds easy to search and quickly identify what the recordings are makes them 100% more attractive to use than a loosely organized collection of sounds.

A big thanks to Kai Paquin for the story behind his new SFX library!
Be sure to check out the full library below: