Recordist Stosh Tuszynski is the creator of the of some excellent, and truly original, sound effects libraries – and for his latest release, Thermal Flux, he really outdid himself. Here’s his story on the recording process, and some of the (fiercely hot) challenges he faced while recording the library: 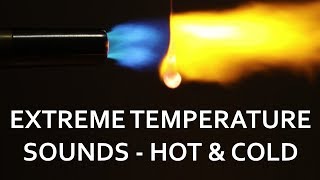 The launch trailer for Thermal Flux

How in the world did Thermal Flux come to be? Good question. Sometimes identifying the origin of a library is difficult for me to narrow down to specifics. For Thermal Flux, I can narrow it down to one video: 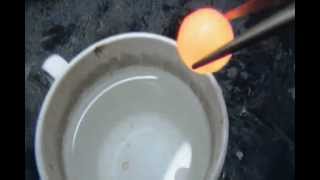 I don’t think any sound designer can watch that without thinking how cool it sounds and what they might use it for. With over 10,000,000 plays, apparently a TON of people think it sounds really cool. As a sound designer and library creator, I couldn’t help but think of all of the other neat sounds you could make with extremely hot and/or cold objects. Maybe I could make a library!

As a sound designer and library creator, I couldn’t help but think of all of the other neat sounds you could make with extremely hot and/or cold objects.

I first saw that video about six months ago. Soon after I bought a couple blow torches and some ball bearings. To familiarize myself, I wanted to do some testing sans mics. This turned out to be a great idea as there’s a lot of logistics in recording such extremely hot things safely!

For hot props, there are three main things to consider:

Ball bearings in particular are especially difficult to work with. What better object to heat up glowing hot and move around then a perfectly round and slippery metal ball? First I had to figure out what would hold the ball in place while I heated it with torches. In my initial attempts I used a similar method to what “carsandwater” does on youtube. I used a couple of pieces of wood and screwed in three screws to hold the ball (think reverse tripod): That actually didn’t work too bad… it held the ball fairly securely. The one thing I noticed, however, was that over time the screws would weaken and ever so slightly bend from the heat. It still held the ball in place, but I found out it didn’t take much for the ball to come loose. In one misstep, I nudged the wooden base with my foot. The ball (which was already glowing red hot) fell to the ground.

In one misstep, I nudged the wooden base with my foot. The ball (which was already glowing red hot) fell to the ground

Luckily, I had assumed something like this would happen. This test was taking place on a concrete floor in a basement. Furthermore, I made sure to set up near a drain so that the natural slope of the concrete would guide the ball to a predictable destination. Those two choices saved me there.

I settled on using a ladle to hold the ball while I heated it. This worked will because unless something went horribly wrong, the ball was never going to roll out, and it also allowed me to heat the ball bearing much more efficiently:

So the bearing is heated… how do I pick it up now? My first thought was tongs. Those actually didn’t work too bad, but I didn’t like how unpredictable the movement of the bearing was as I released it. I think a combination of the bearing’s weight and the way it rested in the tongs, left little room for error as you released the ball. Sometimes it would fall straight down. Other times it would slightly roll one way or the other before it fell. Nothing crazy, but I wanted to have as much control as possible so I instead opted for something a bit sturdier: These large pliers gave me a lot more control. They had no give to them like the tongs did, and a strong grip on the bearing. The kind of things that make you more confident moving around 1400°F+ ball bearings!

So even with all that planning, I still had to be prepared for when the ball would inevitably fall somewhere I didn’t intend it to. During the record sessions, I didn’t have the luxury of a bare concrete floor for the ball to fall on. Instead I had carpet and hardwood, which don’t get along so well with red hot metal. So, as much as I could, I tried to negate those risks. Whatever prop I was dropping the ball on was usually set on top of a large metal pan which had a sheet of drywall below it. That way if the ball did fall, it would hopefully land in the pan, and none of the heat would make its way to the surface below. So that was the basic process for each new type of recording I wanted. I’d take a good amount of time beforehand to test everything that could go wrong. I’d figure out the safest way to handle the recording. Then I’d figure how to minimize damage if something did go wrong. It’s sort of common sense, but the process worked really well.

With the temperatures involved, a lot more could have gone wrong

Each type of recording had different challenges. For the molten metals, it was figuring out how to make sure nothing spilled or exploded. When I was melting glass and working with dry ice, it was making sure the fumes didn’t build up too much in a sealed studio environment. For hot sand, it was deciding the best way to get it white hot and not have super fine particles blowing around burning things.

Even with all that preparation I did have a few minor accidents. I burnt a table top, broke a glass pitcher, dripped molten aluminum onto a wood floor, spilled a ton of water in the studio. The good thing is they were all (relatively) small accidents like that. With the temperatures involved, a lot more could have gone wrong. All of the testing was definitely worth it!

So I’ll leave you with this… Here’s what happened when I didn’t realize there was a huge cavity of water in the ice I dropped a bearing on: 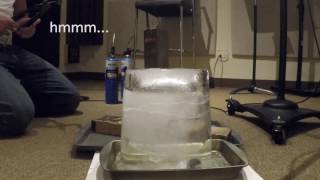 A big thanks to Stosh Tuszynski for the story behind the recordings! You can get the full SFX library below: