French SFX creators Frederic Devanlay and Cedric Denooz have teamed up with SoundMorph to create Matter Mayhem, a new SFX library dedicated to sounds of destruction and chaos. I got in touch with Frederic Devanlay to hear the story behind the library, and just how it’s different from what else is out there: 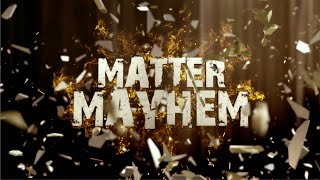 Hi Fred, what was the idea behind Matter Mayhem – and what’s included in the library?

The idea came from Jason Cushing from SoundMorph. He called us and we talked about what we could do to be different from the other libraries. Cedric and myself discussed during long hours to define the content of Matter Mayhem. And the end result? Well, it features stone, wooden and metal structures being blown up, bomb blasts, collapses, scaffold impacts, stone, wood, glass & plastic debris, metal objects, whooshes and first-person debris – captured at near, mid, and distant perspectives. How did you go about creating the library? And what sort of stuff did you destroy to make it?

The first thing was to find different locations (5 in all) with materials, cranes, fenwick, urban atmospheres with good acoustics and not too noisy backgrounds.
We used DPA, contact mic, MS, and stereo mics. We destroyed several cars, metal plates, wooden logs, barracks and stoney walls. We dropped a lot of things from a crane, like dirt, plastic, metal, planks, rocks, cobbles.

How’s it different from some of the other destruction & debris libraries out there?

The first idea was to record different angles (close, mid and next street). All angles are made with only 1 texture (wood, stone or metal). The second was to add a 1st person perspective for the debris fall. The third was to make a tool box with wood, metal, plastic and stone objects.

So when you combine all textures for 1 angle, it’s like a Lego set – you can make it exactly how you want it.

Any favorite sounds in the library?

The recordings from a distance, the destruction of the different-sized textures. The metal crunches, the impacts and creaks. When we asked the guy from the the scrap yard about what we could do with the cars, he said “you can destroy what you want”. This place was like a playground for us and a subject of amusement for the boss of the site. He thought we were completely nuts!

Get the full Matter Mayhem SFX library – with its powerful destruction sounds – below: