As a sound designer, how do you align yourself and your team on your sonic ideas and goals? Bryan Higa is a Senior Sound Designer at Riot Games, and he has written a great piece on how to do that using audio storyboards - and, generously, he's allowed us to share it with you here on the blog: Written by Bryan Higa, and reposted here with his kind permission
Please share:

As audio production becomes more integrated within the game development process, there are more opportunities for us as sound professionals to have a critical hand in the ideation and pre-production stages of game development. That’s right! I’m saying we don’t always have to be at the end of the production line! We can start explorations before there are visuals. We can help inspire game design, concepts, and even the tone of the game.

Audio Storyboarding borrows from visual storyboards, in that it gives the sound designer a blank aural canvas to explore emotions and soundscapes. Sometimes sound designers create building blocks that they can use later during production. The value that audio storyboarding offers is the opportunity to take building blocks and contextualize it within the storytelling process.

Storytelling is often an overlooked tool that is one of the best ways to share ideas and compel people towards your creative vision. Humans have been telling stories for thousands of years! It’s the basis of almost every way we connect with each other in our society. As a sound designer, using storytelling can be an effective way to align yourself and your team on your ideas and goals. During the early development of the character named Pyke in League of Legends, we set out to create a truly horrifying serial killer of the deep. Because horror relies heavily on fear and sound, we knew that we would need to dive deeper into creating a sense of terror in a game that is traditionally not scary. The only thing that was “locked” was his gameplay abilities and that he was a terrifying, relentless killer, and animations and visual effects were still very early in pre-production. It was a perfect time to crack open my digital audio workstation, or DAW for short, and start exploring! So there I was, with a blank canvas. First, I decided I needed to emphasize the sense of horror by presenting in the perspective of Pyke’s victim. This would put the listener in the shoes of someone being stalked and killed by Pyke, thus creating a sense of dread for him. In order to really sell the moments of horror, there needed to be a balance of calm and routine. Having Pyke’s victim’s story start with him drinking at a pub at night helped set up a normal relatable situation.

Leaving the bar was when it was time to turn on the suspense. Outdoors on the docks, Pyke’s victim hears the sound of someone being gutted with a cleaver. In order to make the listener feel a sense of panic, I thought having Pyke walk steadily toward them dragging his weapon on the ground would make the listener feel powerless as he ran forward to attack.

After the attack, the victim pushes Pyke into the water. I also thought it would be fun to use the horror villain trope of not really being dead after the victim seemingly outsmarted them. For the climax of the story, Pyke launches his harpoon straight from the water into his victim’s stomach, spilling out his insides, before he pulls him down into the water and drowning.

In a nutshell, the outline of the storyboard was this:

Storytelling doesn’t need to be challenging or time-consuming! I find that following the storyboard outline listed above helps me tell a clear and concise story that people can easily understand. Because storyboarding should be done quick to prove out ideas, don’t be afraid to rely on pre-made or pre-recorded sounds from libraries for audio that you don’t want to spend time designing. It’s encouraged! Generally speaking, it’s a good idea to “paint broad strokes” before getting into the detail. Spot in the ambiance and other secondary background sounds into your DAW session first to get a sense of the atmosphere you are building.

Don’t be afraid to rely on pre-made or pre-recorded sounds from libraries for audio that you don’t want to spend time designing. It’s encouraged!

For the Pyke storyboard, I knew I needed indoor bar & outdoor dock ambiance, so grabbing a few layers like water lapping, frogs, and dock creaks helped create the mood of the piece. Also throwing in secondary sounds like door creaks, chair squeaks, insect fly bys, and glass breaks helped add to the story. Placing a time cap on this editorial helps keep this from getting too complicated.

My primary focus was to explore the sense of being hunted by a relentless killer, the sound of invisibility water magic, and the gruesomeness of his hook and pull ability. One challenge was that there are several other “hook and pull” abilities in the game by other characters. How would Pyke’s sound different and iconic to him specifically? One of the other stretch goals was to also explore what the feeling of being pulled underwater and drowning would sound like. Scary stuff! I spent a day exploring these details and creating building blocks. This was the time where I got to fine tune the elements of Pyke and find what could be iconic about him. How rusted and heavy should his dagger be? What synths should I use to create tones for his dark water magic? Should his hook throw have elements of rope or chains? Maybe both? I found answers to this as fast a possible and started to construct a story using all of the elements I had created, like a painter’s color palette.

Since I decided that the perspective of the story would be portrayed through the ears of one of Pyke’s victims, we’d need to have an additional character in this story for listeners to follow. Having voice is very important for listeners to relate to on a human level. This called for recording… **ahem** quick voiceover to give a little bit more character to Pyke and his victim. (hint: ME!)

Everything came together in less than a week! Here is the original audio storyboard for Pyke with all the elements mixed together that I shared with my team. 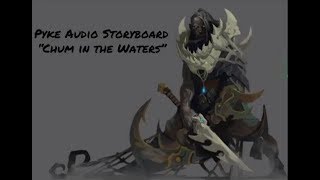 Being able to create and explore sound without being shackled by visuals is a cathartic experience! From my experiments working on the audio storyboard, I was able to define what Pyke’s invisibility magic should feel like. I was also able to create and list the different layers that his hook and pull ability would include. Lastly, exploring the sound of drowning informed in the sense of dread other players should feel when a Pyke player is around them. Armed with a direction and a plan, I now had a list of what Foley I needed to record and what audio tools I needed to use to create the core sounds of Pyke.

Benefits of sharing audio storyboards with your development team:

Once I shared Pyke’s audio storyboard with the team, excitement spread like wildfire – there was a sense of alignment on who we wanted to create and also how he would live and breathe in the world. Team members told me they listened to it countless times, which was great because it gave them a tangible frame of reference on how Pyke should sound throughout the development process, making feedback from non-audio developers easier to give and receive. The marketing team caught onto the excitement for their publication campaign and the narrative team got so excited about the idea of telling stories through audio that we collaborated together to create a six-part audio drama detailing the world of Bilgewater, which showcased the original Pyke audio storyboard that inspired it. 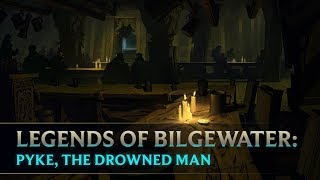 Using audio storyboards has transformed the way I develop audio for video games. It has brought me closer to the development process by getting the whole development team involved and excited about game audio. Having something to point listeners to as my goal has opened up so many discussions across the team. Best of all, it can scale in content based on what your needs are. Maybe you want to explore different audio styles for combat or experiment with what different creatures could sound like. It can also be as short as 30 seconds or last several minutes. It’s a blank canvas for you to explore! Concept artists do a lot of early work exploring all possibilities and sound designers can most definitely be a part of that journey too. It all starts with an idea and a call to adventure.

A big thanks to Bryan Higa for sharing his thoughts with us! You can meet him on LinkedIn here, and be sure to check out his website here