Anthem is an excellent-sounding new release from BioWare, and in this exclusive A Sound Effect interview, SFX Supervisor Michael Kent discusses the aesthetic direction for the game, and how they designed the sounds of the different flying exosuits called Javelins. He also shares their strategy for keeping the mix clear amid chaotic conflicts - and the sound tools and synths they used to design Anthem’s sound: Written by Jennifer Walden, images courtesy of BioWare
Please share:


BioWare’s newest release Anthem – out on PC via Origin, Xbox One, and PS4 — is a third-person shooter that mixes the beauty of fantasy-genre biomes with the destructiveness of sci-fi/future-tech weaponry. According to BioWare, Anthem takes place on “a world left unfinished by the gods, where a shadowy faction threatens all of humankind. The only thing that stands between these villains and the ancient technology they covet are the Freelancers.”

A Freelancer’s mode of transportation and means of attack is provided by an exosuit called a Javelin. Players can choose between four classes of Javelins; each has its own unique abilities, attacks, and defenses — all modifiable to suit a player’s tastes. The different classes of Javelins work best in conjunction with one another, so players have the option to team-up in co-operative multiplayer mode. Prefer to fly solo? Anthem also offers a single-player option.

Here, Michael Kent, SFX Supervisor at BioWare discusses the aesthetic direction for Anthem and how they designed the different Javelins. He talks about their strategy for keeping the mix clear amid chaotic conflicts. Kent also shares insight on the sound tools and synths they used while designing Anthem’s sound. 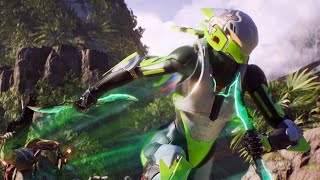 Sonically, how does the direction for sound on Anthem compare to games like Mass Effect and Dragon Age? Michael Kent (MK): For Anthem, we wanted to create something that was in between our two existing franchises Mass Effect and Dragon Age. Mass Effect is a very sci-fi centered sonic experience, while the Dragon Age experience is fantasy. For Anthem, the sound is a hybrid of fantasy, realism and sci-fi. We wanted the game to sound exciting and visceral and be grounded in the universe the players are in. Working within a sci-fantasy world, there are fewer rules. We’re able to pull from a range of genres, styles and sources of inspiration.

There is so much going on visually and the combat is intense — tons of enemies coming at you at once. How did that influence your use of sound in the game?

We built signal-based mixers that activate on player actions and intensify the player’s experience while cleaning up the mix.

MK: The biggest thing for us was to give each faction or enemy class distinctive sonic representation on the battlefield. Also, because things can get really chaotic, we wanted to make sure the player’s actions — as well as any threat to the player — were front and center. We built signal-based mixers that activate on player actions and intensify the player’s experience while cleaning up the mix. With these mixers and Frostbite’s HDR audio priority system, we were able to build a mix that was clear and player-focused.

Behind the awesome sound of Anthem:

Let’s look at the different Javelins and their unique abilities. How did you create the sounds for the four classes of Javelins: Ranger, Colossus, Storm, and Interceptor? What are some sonic distinctions/characteristics for each class?

MK: The sounds were created from Foley, field recordings, and synthesis palettes that we made for each individual suit class.

For the Ranger, we went for a ballistic “Marvel” sound vibe.

The Colossus is like our “dump truck.” We literally went to a junkyard and smashed metal around to create a lot of the sounds for this suit.

The Storm is our tech/mage class. We wanted this suit to sound cleaner and more sci-fi than the Ranger or Colossus. Its abilities are very much a combo of fantasy and sci-fi, a combo of clean tech sounds and synthesis.

The Interceptor is our sci-fi ninja! So, for this class we used very clean, quick, punchy sounds. Again, a combination of synthesis and clean tech sounds. 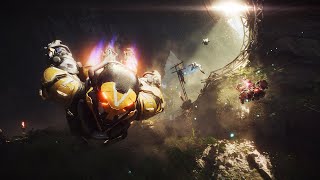 Watch nearly 20 minutes of Anthem gameplay footage
What are some sounds that the Javelins share?

MK: The Javelins don’t share any sounds. We built a system that handles all the Javelin audio, and we switched out content for each class.

Each class of Javelin has special abilities, but there are similarities. For example, Ranger has Venom Darts, Colossus has Acid Spitter, and the Interceptor has Acid Bomb. All of these are ‘acid’ based attacks. How do you differentiate between them sonically?

MK: Great question. I was literally commenting about how much acid is in this game the other day!

When you have multiple designers making sounds for different Javelins using the same source audio, you’re naturally going to get unique sounds that all fit within the same universe.

It was challenging to create all the different permutations of elements without making them sound the same. Throughout the project, we created and curated the Anthem sound library, which is where audio designers could go and grab source to make new content. When you have multiple designers making sounds for different Javelins using the same source audio, you’re naturally going to get unique sounds that all fit within the same universe. We’d also get creative with what we used to get interesting sounds — everything from yogurt to frying bacon. Did you do any fun field recordings for Anthem? How did those sounds work into the design?

MK: We did a fresh weapon shoot for this game in L.A. with the DICE team to get some new weapons recordings. We also recorded a lot of Foley in-studio, at our houses and in the field, as well as a bunch of environment recordings. We also worked with some outside vendors to provide libraries specific to Anthem to help us get unique audio across the game. Any favorite sound tools (plug-ins, software, programs, or outboard gear) you used for designing sounds for Anthem? Can you share examples of how you used them?

MK: One of our most used tools for sound design is Ableton Live. The ability it gives you to chain effects together so quickly makes designing sounds faster. We designed most of the weapons, creatures and abilities using Ableton.

We used almost all the iZotope plug-ins. RX7 we use a lot to clean up library and recorded assets before we start manipulating and designing new content with them.

Audiority Grainspace – We used this plug-in for a lot of texturing for UI elements to add clean harmonic tails to the sounds.

Xfer Records Serum FX + Auto filters in Ableton – We used these to give movement to our synthesized audio sources. You can chain multiple filters together with LFOs, modulating parameters on each filter to create movement in the sounds you’re processing. We used these effects to create some of the otherworldly sounds you hear in the game.

reFuse Lowender and BOOM Library Enforcer – These were used on many assets to make them feel heavy, large and punchy.

Sonic Academy Kick 2 – This plug-in can make everything from lasers to crazy LFE. It’s extremely versatile.

Native Instruments Reaktor – We used Twisted Tools S-Layer for creating variations of sounds or unique content, as well as their DRON-E for weird ambient textures.

Outboard Gear – There’s a massive amount of modular synths in the game. Some of the modules we liked using the most are:

Recording Gear — For mics we used the Sanken CO-100k so we could record things at high sample rates to pitch and sculpt later on. We used DPA 4011s, Sennheiser 8040s, as well as the Elektrosluch from LOM. We used mainly the Zoom F8s for recording, as well as the Sound Devices 702T. Anthem uses the Frostbite 3 game engine. Was it a good fit for the sound team?

We also have the benefit of using Frostbite’s HDR system for audio, which is a pretty sophisticated way to prioritize what you are hearing.

MK: This is an excellent engine for us as the sound design capabilities are endless. The fact that you can easily attach to any parameter in the game is amazing. It allows us to support the game design with the sonic detail it deserves. We also have the benefit of using Frostbite’s HDR system for audio, which is a pretty sophisticated way to prioritize what you are hearing. What are you most proud of in terms of sound on Anthem?

MK: A few things stand out for me. Definitely the exosuits and the fact that we achieved our goal of making each one sound different. From flying to fighting, so many intricate details were woven into the sound design for these suits.

Also, I’m proud of the score; it is one of the best we’ve had in a BioWare game. It reacts to the player’s actions and makes them feel more heroic every step of the way.

I’m also really satisfied with the final mix of this game. It’s tight, punchy and exciting, and I can’t wait for people to experience it.

A big thanks to Michael Kent for giving us a look at the exciting sound of Anthem – and to Jennifer Walden for the interview!